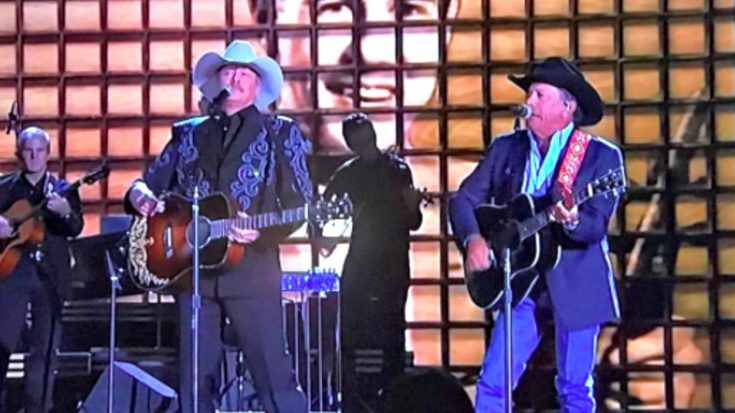 What happens when you combine the talents of two men who have sold a combined 180 million records, won 35 combined CMA Awards, and together changed the face of country music throughout the ’80s and ’90s? You get a collaboration of epic proportions!

Alan Jackson sang his 2003 hit ‘Remember When’ then was joined by George Strait on stage to sing the title track from Strait’s 2008 album ‘Troubadour’ and as photos of iconic country artists and clips of past CMA Awards highlights played on the big screen.

Prior to the CMA Awards, Jackson said that the CMAs were one of the highlights of his career.

“I knew the others a little bit, and there are several different shows, even the Grammys, you know. Everyone wants to put that at the top, and that’s cool but to me, I was a country singer. I wanted the Country Music Association awards,” he explained.

It’s been 13 years since Jackson took home his last CMA Award so it meant a lot to him to be asked to participate in this year’s historical show.

“It’s very cool, especially at my age. Been through so much, been on so many shows, won every award there is, but being able to come back and be a part of it and celebrate this big year, that’s an honor.”