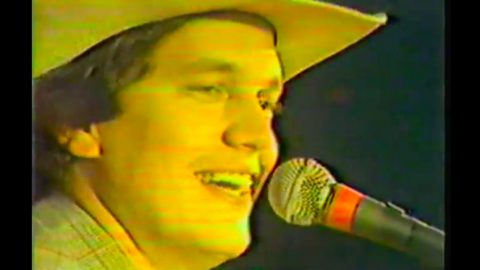 It’s tough to imagine country music without George Strait. The handsome cowboy rose to King of Country status in the ’80s when burst onto the music scene taking seven of his first nine albums to the top of the country charts. By the end of his first decade in the business, Strait had gained a massive fan following that can be credited to his charming personality, immense talent, and love for traditional country music.

Strait was headlining tour act for three decades before hanging up his touring hat in 2014 after thrilling stadium crowds with his farewell The Cowboy Rides Away Tour. But, that doesn’t mean The King isn’t still making music. In fact, Strait is gearing up to release his 30th studio album in 2019 and recently released the latest track from the project. “Every Little Honky Tonk Bar” is a twangy, toe-tapping tune co-written by Strait that is as true to his sound as he’s ever been.

Thanks to Strait’s timeless sound and unwavering devotion to country music roots, a new generation of country fans is discovering what he has to offer. After all, they don’t call him the King of Country for nothing! But, if we were to turn back time and ask young George Strait if he thought he would become one of the most legendary country artists of all time, he probably would have said “no.”

In rarely seen footage from 1982 filmed prior to a Sun Valley concert, we get a glimpse of a baby-faced George Strait who is enjoying the early successes of his career. Part of that success included packing out venues with frenzied fans who simply hope to pass roses to or catch the eye of the rising star who can “make a cowgirl’s jeans twitch at 100 yards.”

In the clip, Strait is interviewed and shares how he got started singing country music.

“Well, I was in the service and I just for some reason got it in me that I could sing. I thought that I could possibly make a career out of singing. So, I went and bought a guitar. I was in the Army at the time, I was stationed in Hawaii,” Strait said. “I started learning songs, and I learned enough where I could get a band together. The last year I was in the service, that’s what I did for the Army…I sang country music.”

It’s evident that Strait sings simply because he loves it, and it probably fair to say that with or without his success he would have found a place to share his voice. We don’t know about you, but we’re awfully glad that George Strait bought that first guitar and that the Army allowed him the opportunity to sing!

Check out one of George Strait’s earliest recorded interviews in the video below.