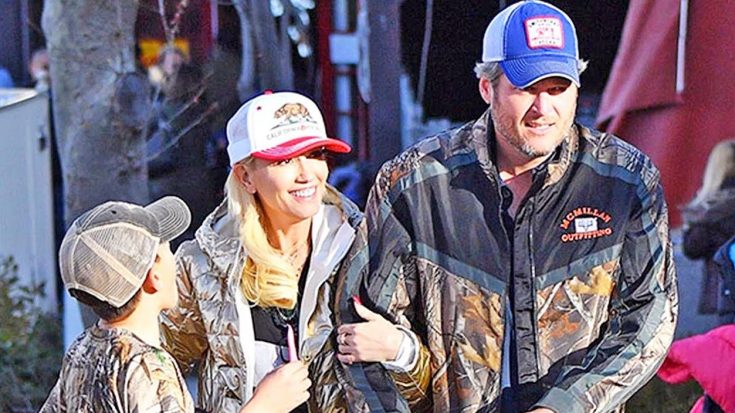 When Gwen Stefani‘s divorce from Gavin Rossdale was finalized in April 2016, the couple agreed to share joint custody of their three sons, Kingston, Zuma, and Apollo. The boys spend most of their time with their mother, since Rossdale is currently serving as a coach on The Voice UK.

It didn’t take long for Blake Shelton to develop a close relationship with Stefani’s sons. He’s invited them over to his house for spring break, and has even gone with them and Stefani to Disneyland.

Stefani’s sons seem to enjoy spending time with Shelton as well. The three of them have been seen mimicking his country sense of style by wearing camo and plaid shirts. More recently, they decided to copy a signature part of of Shelton’s “look.”

Shelton is known for sporting what may be the most country tattoo we’ve ever seen. The tattoo wraps around his arm, and features a set of deer tracks surrounded by two rings of barbed wire.

Although Shelton’s tattoo is perhaps the most recognizable in all of country music, it holds no special meaning to him. During an interview with Oprah Winfrey in 2013, Shelton said that the tattoo “doesn’t mean crap.”

Although Shelton may not be all that fond of his tattoo, it seems that Stefani’s sons are. On Saturday (April 1) she shared an adorable picture of them sporting fake tattoos that matched Shelton’s signature ink to a tee.

How cute is that? It’s so sweet to see how Shelton has been able to bond with Stefani’s sons.

Go ahead and tune in to the video below to listen to Shelton talk about his tattoo in his interview with Winfrey and fellow Voice coach Adam Levine.