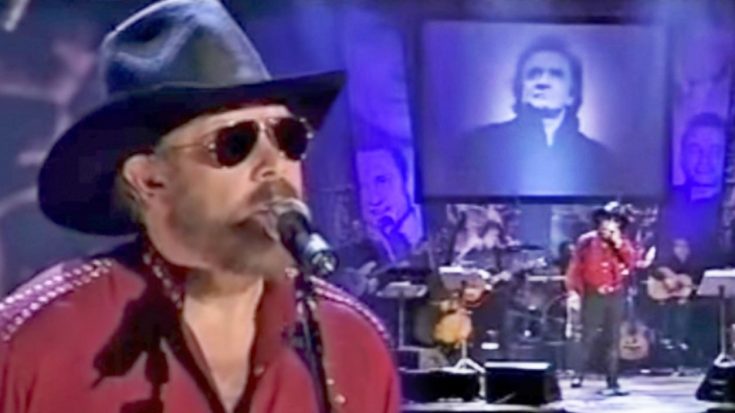 Johnny Cash and Hank Williams Jr. had a tighter bond than the word “friends” can detail.

Many may not know this, but June Carter Cash was Hank Jr.’s godmother. She and Hank Jr.’s mom, Audrey Williams, were extremely close and when she had her son with country legend Hank Williams, asking June to be his godmother was a no brainer.

Because June had a close bond with young Bocephus, so did her husband, the legendary Johnny Cash. After Cash passed away on September 12, 2003, the country music community came together to pay tribute to The Man In Black.

An emotional Bocephus walked to the microphone and spoke in a soft, low tone.

“I sure don’t have to make up something to tell you about Johnny Cash,” he said to the crowd. “We had a wonderful, long friendship. We loved Civil War and Western history. We liked to shoot cannons off Franklin Road and knock people’s books off their shelves.”

He told another story, one that explained Cash’s character, and how much Hank Jr. really meant to him.

“I had a pretty bad fall on August the 8th of 1975 when I went down about 550 feet in the Montana mountainside, and I had a left eye left. That was it. And there was many operations. They wasn’t sure if I was gonna make it, but on August the 11th, Johnny Cash, and June, were standing by my bed when I came around,” he said. “I think that kinda tells you the whole story right there.”

He expressed how blessed he was to be a mentee of Cash’s, with him never wanting anything in return. Hank Jr. closed out his speech by saying, “The last few days have been very special and tonight’s special. Let’s see what we can do here.”

His band began playing the iconic intro of “Ring Of Fire,” and he followed suit with its opening lyrics, sounding eerily similar to the late Johnny Cash.

Watch his speech and his performance below.