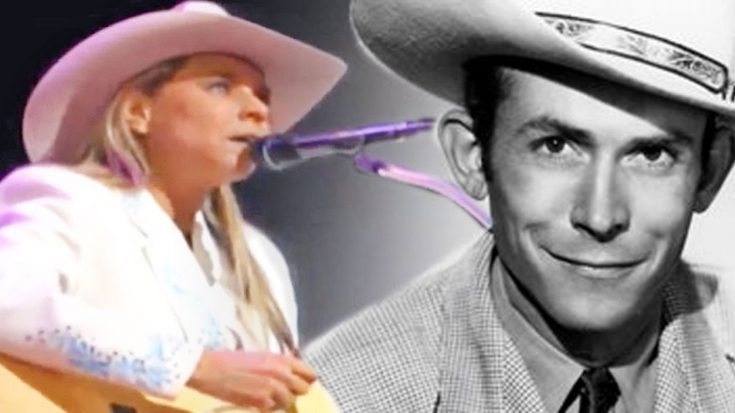 In only 15 years, Hank Williams managed to leave a lasting imprint on country music. His songs are still cited as some of the best in terms of delivery and songwriting. He is the artist that inspired so many others, and he continues to inspire people today.

One person who caught the musical bug from Hank was none other than his own daughter, Jett. Following his divorce from his first wife, Audrey (mother to Hank Williams Jr.), Hank had a brief relationship with a woman named Bobbie Jett, who later gave birth to a daughter, who we now know as Jett.

Like her father, Jett is a singer and songwriter. She has toured with the Drifting Cowboys, which once served as her father’s backing group.

Needless to say, Jett knows her father’s songs well. So when it came time for her to perform at the Grand Ole Opry, she made sure to bring one of his famous hits along with her.

That hit was “I’m So Lonesome I Could Cry,” which served as the B-side to the number two hit “My Bucket’s Got a Hole in It” in 1949. The song has been covered by numerous artists and has taken on a status as iconic as Hank himself. In fact, the song is so important in the scheme of country music history that Rolling Stone ranked it as the third greatest country song of all time.

In an undated clip, Jett can be seen honoring her father with her rendition of “I’m So Lonesome I Could Cry.” Wearing a white suit with Western detail and a cowboy hat like her father’s, Jett stood at center stage with her acoustic guitar in hand.

All eyes were on Jett as she sang the mournful lyrics her father wrote years before. The audience was transported back through time as Jett sang, because her voice sounds like something directly out of her father’s era.

Jett was rewarded with a warm round of applause, cheers, and whistles once she finished the song. We think that such a reaction was well-earned on her part, because she honored her father beautifully.

Now it’s time for you to watch Jett pay tribute to her legendary father with “I’m So Lonesome I Could Cry.” You can tune in to the clip below to enjoy her performance.

Jett made Hank proud that day, that’s for sure.