By Jennifer Pernicano on April 28, 2017
Advertisement 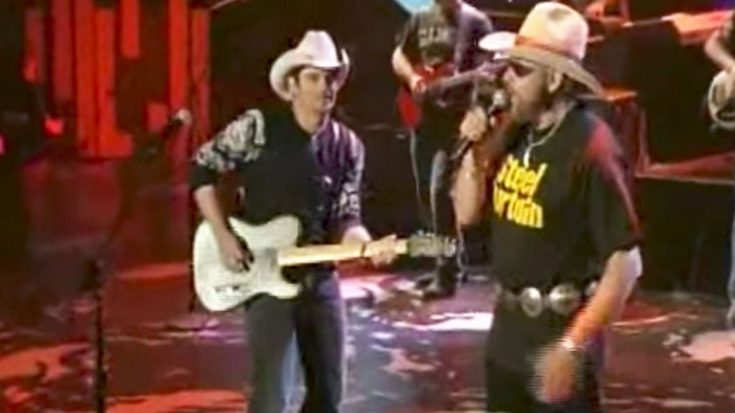 Brad Paisley and Hank Williams Jr. thrilled an unsuspecting crowd when their manly performance had women swooning and gentlemen clinging to their ladies! Kicking off his hilarious number, Paisley worked up his audience with his good looks, coy grin, and epic guitar skills!

Suddenly halting his lyrics, Paisley yelled to the audience, “I have two words! Hank Jr.,” prompting the crooner to casually stroll on the stage and sing, “I can hear you now talking to your friends’ Saying ‘Yeah boy he’s come a long way’/ From dragging his knuckles and carrying a club/ And building a fire in a cave.”

The two country boys sported their cowboy hats and undeniable talent as they had the time of their lives sharing a well-known, comical country tune that sent their crowd wild! The audience was busting with laughter as Hank Jr. hilariously recited the lyrics, “These days there’s dudes getting facials/ Manicured, waxed and botoxed/ With deep spray-on tans and creamy lotiony hands/ You can’t grip a tackle-box.”

Be sure to get a taste of this masculine duet and let us know what you think!