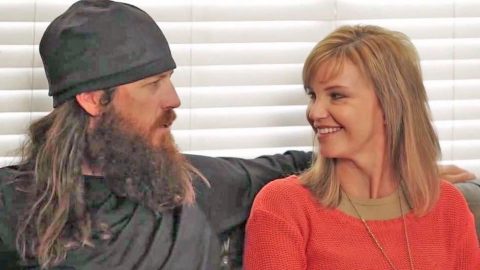 Fans may or may not know that Missy Robertson from Duck Dynasty has an incredible singing voice, but something nobody knew is that her husband, Jase, can carry a tune, as well!

For the Robertson family’s 2013 Christmas album, Jase and Missy sang a flirty duet together, which showed off both of their singing talents.

Singing “Baby, It’s Cold Outside”, Jase decided to take a different approach to the song. He sang with Missy at the chorus, but he spoke all his other parts.

“At first I tried to sing the first two or three lines,” he said in a behind the scenes clip. “But then I thought, ‘This is all about flirting with my wife!’ So, I scrapped that and just started flirting with her the entire time. And I really was! I knew I had done my job when after it was over, [Missy] was three shades of red.”

Just listening to Jase flirt with his wife of over 20 years is so cute, you will immediately smile from their love. Missy delivers incredible vocals and when Jase does sing, he’s pretty good, too!

Listen to the flirty song below.