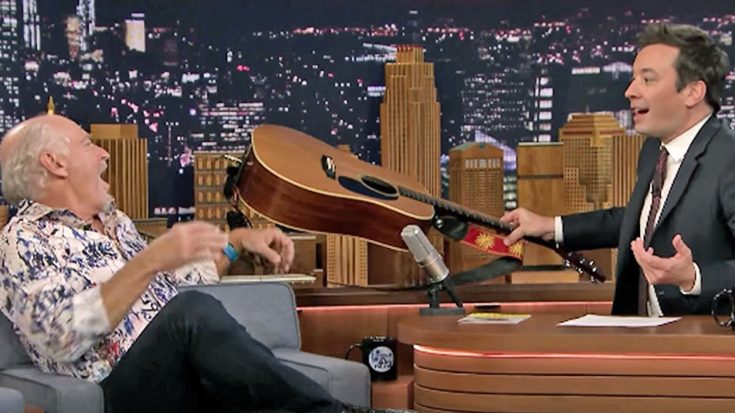 In the middle of his interview on The Tonight Show starring Jimmy Fallon singer Jimmy Buffett was asked about his legendary song “Margaritaville,” which has inspired a Broadway Musical and even a retirement community!

Buffett, who describes his new business venture as “active living” instead of a retirement community, says that when people move in, it will just be a “continuation of fun.”

With street names like Flip Flop Alley, Buffett has thought of everything with the first community opening in Daytona so residents can go to the Daytona Speedway!

Buffett then spoke about his Broadway Musical, Escape to Margaritaville, which opened last week and of course, Fallon couldn’t let him leave the stage without performing his hit song that inspired all these ventures!

“I couldn’t ask you to play a little,” Fallon asked as he pulled out a guitar from behind his desk.

Buffett happily obliged, especially since he had the help of Fallon’s band The Roots. Fallon grabbed a tambourine and played along as Buffett led the crowd in a impromptu sing-along of “Margaritaville” that you won’t be able to watch without a huge smile of your face.

Take a look at the spontaneous performance and the full interview below.

Posted by Escape to Margaritaville: The Musical on Wednesday, March 21, 2018