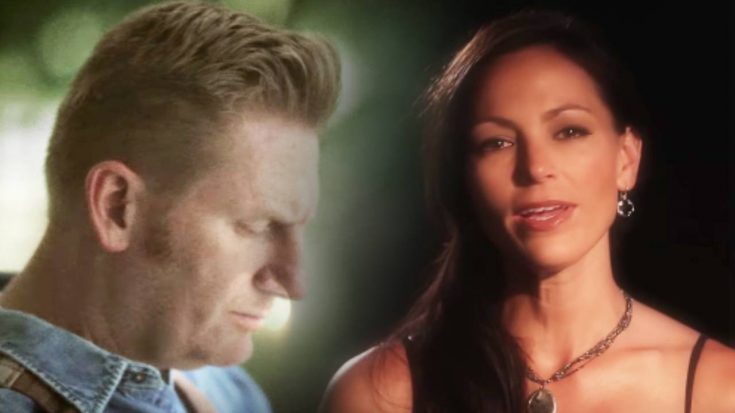 Joey Feek passed away March 4, 2016 and was laid to rest on her beloved Tennessee farm just a few days later. During her courageous nine-month cancer battle, one of the songs that garnered the most attention was “When I’m Gone,” a song she recorded for Joey+Rory‘s 2012 album His & Hers.

The couple, who got their start on CMT’s Can You Duet? in 2008, recorded the heart-wrenching ballad in hopes that it would touch lives.

“We knew the recording was special and our hope was that the song’s message might help someone who is in the midst of losing someone they love or who has already lost someone and are trying to make sense of it all,” Rory wrote in early January.

“When I’m Gone” was penned by Joey’s good friend Sandy Lawrence and is sung from the perspective of a wife telling her husband that he’ll be okay when she’s gone.

“I was devastated, absolutely devastated when I heard it and what it meant and coming from the person who is leaving their loved one,” Joey told The Boot in 2012. “That concept was just something that I had never heard or thought of before and it really struck me.”

When the time came for the couple to make a video for the song, they chose their Pottsville, Tennessee, farm for the setting. In a video released on May 16, 2019, Joey and Rory take us behind the scenes of “When I’m Gone” and share some of the most emotional moments from the taping including Rory being overcome with tears as he gazes as the family cemetery.

As Rory sits in a rocking chair on his home’s upstairs deck, he tells the cameras “From right here I get to see my bride’s garden…and our back field and the cemetery where the people who built our farmhouse are buried, and where we’ll be buried some day.“

He continued, referencing the raw emotion portrayed in the video, “That view through the screen door, there’s no acting going on. That stuff is real, even the emotion that I felt the second I starting thinking about what my life might be like and it just overtook me and I couldn’t stop myself.“

While the song is heavy and emotional, Joey pointed out that one of her favorite things about “When I’m Gone” is that the song concludes by giving hope to the grieving.

“At the end there is a ray of hope. I think that’s a really neat observation. There are sad songs, but on this song in particular there’s a turn in the end where there’s a sense of hope that everything’s gonna be okay,” Joey shared.

Watch the full video of Joey and Rory Feek’s “When I’m Gone” below.