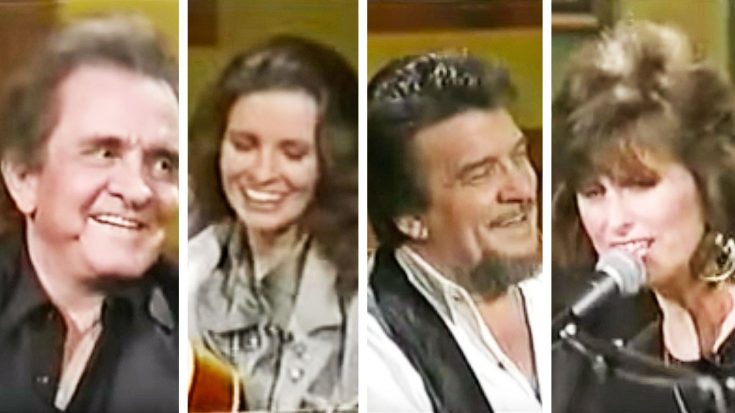 Few people know this, but Johnny Cash and Waylon Jennings go a lot further back than their Highwaymen days. It turns out that these country outlaws were once roommates!

The two managed to maintain their friendship for decades, until Waylon’s death in 2002.

Join Willie Nelson, Waylon Jennings, Johnny Cash and Kris Kristofferson for this live concert recorded in 1990. The Highwaymen perform classics like "Big River," "Me and Bobby McGee" and "Always on My Mind" — tonight at 7pm on THE HIGHWAYMEN LIVE AT NASSAU COLISEUM. pic.twitter.com/jjyBta3Kll

To help support Waylon, Johnny once appeared as a special guest on his show Waylon Jennings and Friends. But Johnny didn’t come alone. He also brought along his wife June Carter Cash, who joined him, Waylon, and Waylon’s wife Jessi Colter on the show.

All four country singers gathered around in a living room setting, with June beside Waylon on the couch. Johnny was in a chair next to June, while Jessi sat across from everyone at her keyboard.

The four of them got to talking, and the ladies decided it would be fun to try and serenade their husbands. June told Jessi to go first and sing to her “favorite man,” to which Waylon responded with a teasing snore.

But the joke was on Waylon, because Jessi started singing to Johnny instead of him! She eventually made things right though, and sang about her own husband in the second half of her song.

Everyone got a good laugh out of Jessi’s little serenade, especially Waylon. “I just figured, well, terrible place to find out about a divorce,” he joked.

June had a tough act to follow, but she managed to impress the guys just as much with her own serenade. You can catch it in the video below!