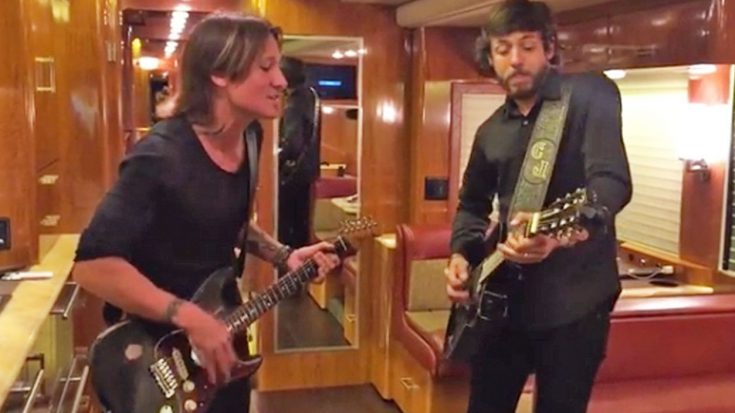 Keith Urban and Chris Janson teamed up for pure country rendition of John Michael Montgomery‘s beloved “Sold” on a tour bus prior to hitting the stage of the Grand Ole Opry.

Both country singers plucked on their guitars, Urban taking the lead on vocals with Janson transitioning in at the chorus. The “Buy Me a Boat” singer closed out their tour bus jam session, pulling out his harmonica to play, thrilling Urban with his ability to play both the guitar and harmonica simultaneously.

Later on in the night, the pair teamed up again to perform the song once more on the historical stage. The duo effortlessly executed the quick-paced tongue-twisting lyrics in the similar rapid fire fashion heard in Montgomery’s original.

“Sold (The Grundy County Auction Incident)” was recorded by Montgomery in 1995, the song going on to dominate the country charts in both Canada and the United States at No.1. The song tells the adorably quirky love story of a man who falls in love with a beautiful woman seated in the second row, the pair finding love that day “on the auction block.”

You can watch Urban and Janson’s rendition of “Sold” below!