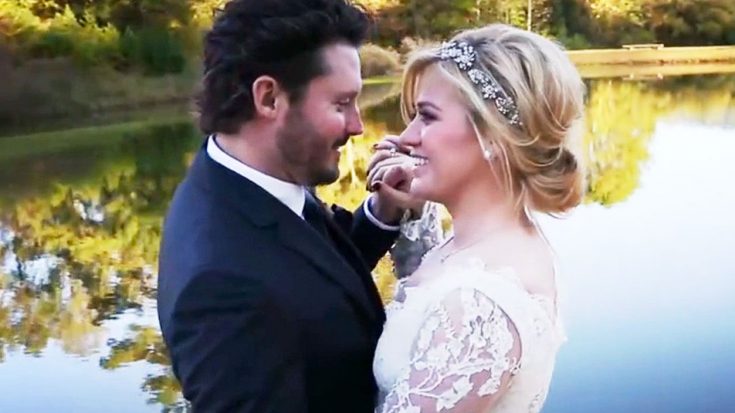 Kelly Clarkson is on top of the world with her riveting career as a Voice judge, chart-topping hits and accomplishments in the business world. And that’s just scratching the surface! She also has a full-time commitment as a mommy to two, as well as helping out with two more kiddos from her husband’s previous marriage! How does she do it? With lots of love and support from her hubby.

While Clarkson admits that at times she struggles with finding a balance, she has continued to put her family first and isn’t afraid to admit to difficulties. Clarkson’s husband and father to her children, Brandon Blackstock, has been one of the singer’s biggest inspirations and credited with the genuine happiness behind her gushing smile.

As the pop star sat down with CBS Sunday Morning, she proudly reminisced on camera about the very beginning of their relationship when three little words with a lot of meaning changed her life.

“He was the first guy I …said it [to] – and wanted to say it,” Clarkson said referencing the very first time she told her now-husband that she loved him. Being a witness to divorces Clarkson was previously convinced that marriage and love wasn’t for her. “I never thought honestly I would get married or fall in ‘love,’ like they say in the movies…I just didn’t know if it was possible.”

Blackstock and Clarkson met back in 2012 when her manager, Blackstock’s father, re-introduced the two amidst the pop star’s National Anthem performance during the Super Bowl. Although the two had met in the past, Blackstock was married during previous encounters and their single lives had never aligned until that fateful day.

From there, a beautiful relationship flourished and the couple was engaged a few months later. They were married on Blackberry Farm of Tennessee in October of 2013 and the rest was history!

I'm officially Mrs. Blackstock 🙂 We got married yesterday at Blackberry Farms in TN, the most beautiful place ever!

Fortunately, Clarkson was able to snag her knight in shining armor and find her happily ever after. Despite hectic work schedules and tasks of being full-time parents, these two make love look easy. Her song “Piece By Piece” highlights the love her hubby has shown her and you can watch it below!