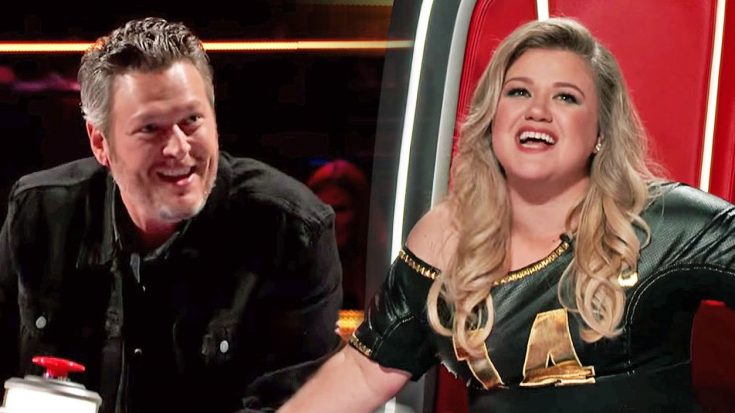 On the upcoming season of The Voice, viewers will get the chance to see three familiar faces in the famous red chairs. To no surprise, longtime coaches Blake Shelton and Adam Levine will be part of the panel this season, while Season 12 winner Alicia Keys is also returning.

There will be one new coach this season, and she’s someone that country fans know quite well…Kelly Clarkson. While she’s a pop artist by definition, Clarkson has dabbled in country in the past and has close connections to artists in the genre.

In fact, she is good friends with Shelton, and her husband, Brandon Blackstock, serves as his manager. Since they go way back, Clarkson and Shelton frequently tease one another, as friends do.

During an interview with Parade, Clarkson revealed that she picked a fight with Shelton during the blind auditions, and she wasn’t sorry about it. As she shared, the reason she fought with him was because she wanted a country contestant for her team.

“People think they’re betraying country music when they don’t pick him,” she said. “It is hard to get a country artist on your team. We did, but it was really hard.“

On Monday (January 29), The Voice released a promotional clip for the upcoming season that offers us some insight into the dynamic between Clarkson and Shelton on the show. The clip, which was all about Clarkson coming in for her first season, was full of footage of contestants telling her that she has always been an inspiration to them.

But in true Voice style, they had to throw a comical clip in there for good measure, and that comedy came courtesy of Shelton. The short clip shows Clarkson and Shelton arguing over a contestant, with Clarkson yelling at Shelton, “You turned at the very last second!“

Shelton, who wasn’t having her argument, started bickering with her like a child while Clarkson tried to put him in his place. That’s when Levine chimed in, saying, “Kelly, welcome to my world of pain!“

One thing’s for certain…we can’t wait to see what Clarkson is capable of as a coach on The Voice! Get a sneak peek into what she’ll be like by tuning in to the show’s new promotional clip below.