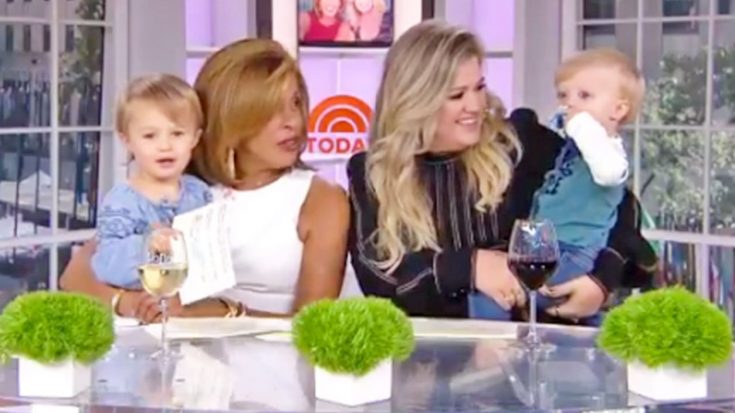 While promoting the release of two brand new songs, “Love So Soft” and “Move You,” and the announcement of her first album in two years, Meaning Of Life, which she calls “the album [she’s] always wanted to make,” Kelly Clarkson guest co-hosted the Kathie Lee and Hoda hour of The Today Show.

Clarkson is all about family, so during her appearance, her two kids River and Remington sat at the table with her and Hoda. River, Clarkson’s 3-year-old daughter with husband Brandon Blackstock, and Remington, their 1-year-old son, joined their superstar mom and stole the hearts of everyone watching.

Kotb asked Clarkson if she sings lullabies to her children, and if so, to sing one right then and there. Immediately, she broke out into “Somewhere Over The Rainbow” from Wizard of Oz. As she was singing, she stopped to say that River must be acting shy because she usually sings along!

The cuteness didn’t end there! River then went on to explain that she was really excited to see tigers during their trip to New York and even demonstrated what sound a tiger makes.

Remington was ever the strong and silent type, and even took off in the middle of the interview, showing off his “good side” to the camera, as Clarkson would say.

Watch the Blackstock children steal their mom’s spotlight in the clip below!

WATCH: We can't handle this cuteness! @kelly_clarkson brought her adorable children on our show! pic.twitter.com/L7s1Zfv3SC