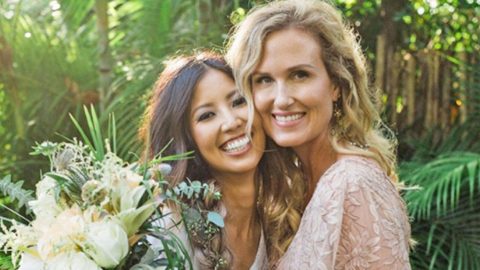 In a new interview on the podcast Focus on the Family, Korie Robertson of Duck Dynasty fame stopped by to talk about her six children.

Korie and her husband Willie were already parents to four young children, John Luke, Sadie, Will, and Bella, when they took in foreign exchange student Rebecca Lo in 2004.

The married couple opened up their home to Rebecca, who did not speak any English, for her junior year of high school. After they ‘survived’ their first year with her, they invited her back for her senior year.

“She came her senior year and it was somewhere in there that we just realized, I remember tellin’ somebody that I had four kids and one of my little ones said, ‘No, you don’t; you have five.’ And Rebecca just became one of ours,” she told podcast host Jim Daly.

Daly praised her for taking in Rebecca, noting that adopting from foreign countries can be difficult.

“So we have not officially adopted her. She just kind of has become ours,” she responded.

After graduating college from LSU, Rebecca went to Los Angeles for a fashion internship before returning to West Monroe to live with the Robertsons. There, she and Korie started a clothing store appropriately called Duck & Dressing.

Rebecca’s father passed away when she was 11, so Willie has really been a huge part of her life, so when he walked her down to aisle to marry her now-husband, there wasn’t a dry eye in the whole place. Now, we know there was something even more special about it.