By Manly Bryant on May 8, 2017
Advertisement 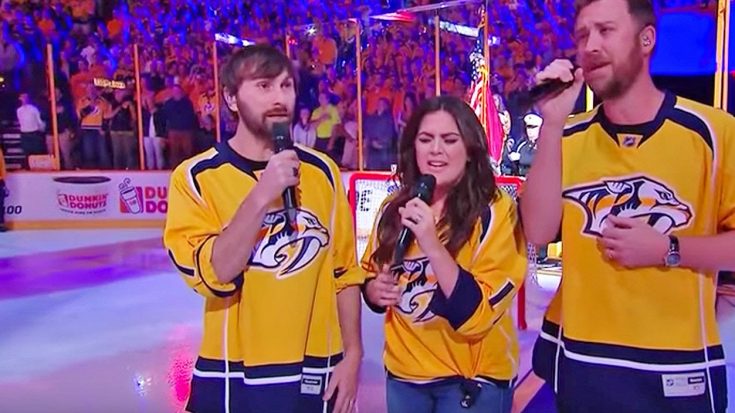 Prior to the Nashville Predators’ impressive take down of the St. Louis Blues Sunday (May 7), country trio Lady Antebellum delivered a stunning a cappella rendition of the nation’s beloved “Star Spangled Banner.”

“Seven time Grammy-Award winning group, Lady Antebellum!” said the commentator to build anticipation for their performance. “As we honor the United States with the singing of the National Anthem!”

Lady A’s Charles Kelley kicked off the trio’s performance with a spine-tingling delivery of the song’s opening line. Hillary Scott transitioned in to harmonize with Kelley, eventually taking over as lead vocalist before the three finished their performance off with an unparalleled harmony they’ve made a career from.

After their 3-1 win against the Blues, the Nashville Predators have advanced into the Western Conference finals of the Stanley Cup. Wife to Predators’ Team Captain Mike Fisher, Carrie Underwood, has excitedly led the team’s cheering squad since they entered the playoffs, even performing her own rendition of the National Anthem.

You can listen to Lady Antebellum’s performance of the National Anthem below.