Look Out Ladies: This Trace Adkins Performance Will Make You Weak In The Knees 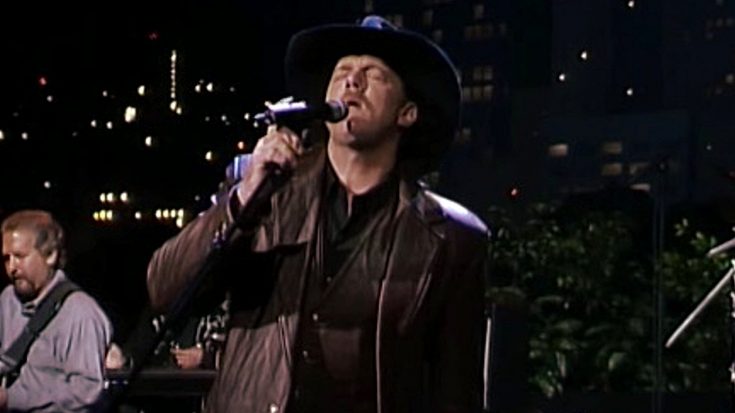 Footage Pops Up From Early Years

In 1997, Trace Adkins was just at the start of what would go on to become an extremely fruitful career. Even at that early stage, he was already known worldwide for his strong, deep voice and hits such as “Every Light in the House” and “(This Ain’t) No Thinkin’ Thing.”

Also in 1997, Adkins jetted over to Texas to perform on the show Austin City Limits. Although that show happened decades ago, footage from the performance recently resurfaced online.

One clip shows Adkins singing something a bit unexpected. Rather than showcasing one of his hit songs, the video has him singing a soulful tune that hit it big way back in the 1960s.

That song was “634-5789,” which was originally recorded by R&B and soul artist Wilson Pickett. The song reached the 13th spot on the pop singles chart, spurring many other artists to cover it.

Over the course of the past several decades, artists of all genres have stepped up to record the song. Just a few names that have been attached to it over the years are Bruce Springsteen, Tina Turner, and Lynyrd Skynyrd‘s Johnny Van Zant.

Adkins Cranks Up The Heat

Adkins didn’t just sing “634-5789” for Austin City Limits…he recorded it. You can catch the track sandwiched near the end of Adkins’ first studio album, Dreamin’ Out Loud.

As you’ve learned, Adkins can work magic when he’s given a steamy love song to sing. For being a 60s hit, “634-5789” is surprisingly sexy, but by no means over the top.

With lyrics that have the narrator begging for a little loving and kissing from a woman he admires, “634-5789” is already a sizzlin’ track. But it becomes even spicier when placed in Adkins’ hands, as you’ll see when you watch him sing it below.

Is it hot in here, or is it just Adkins? You tell us!