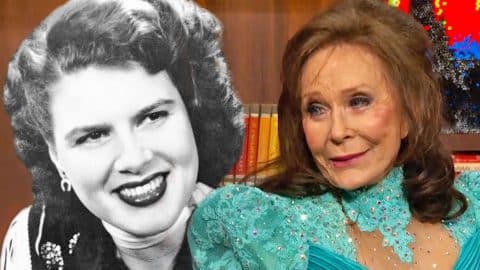 Loretta & Patsy, Friends To The End

As two of the greatest pioneers for female artists in country music, it’s no surprise that Loretta Lynn and Patsy Cline struck up a close friendship. Lynn had come from a poor background but still wanted to chase her dream in country music.

Cline helped guide her through the early stage of her career, and served as a source of support both on and off the stage.

When Cline was killed in a plane crash in 1963, Lynn was lost without her dear friend. Along with Dottie West, Lynn helped place a bell tower in the cemetery where Cline is buried, which continues to play hymns every day at the hour of her death.

Throughout her life, Lynn has made a point to honor Cline any way she can. She recorded a tribute album of Patsy’s songs, and even named one of her twin daughters after her.

What Loretta Remembers Most

During an appearance on Bravo TV, Lynn fondly recalled her favorite memory of her best friend:

“When I’d go over, she’d be cookin’ for me, and when everything was over and she would start diggin’ in her clothes, finding little old stuff for me to wear, sweaters and stuff. And she’d load me down before the night was over.”

As for what modern country artist Lynn thinks Cline would like the most, she says it’s hard to tell, since Cline always had her own, unique ideas.

“She had her own mind and she usually said what she thought, so I ain’t gettin’ into that,” Lynn said with a smile.

We know from the way Lynn talks that the impact Cline had on her life was a great one, all due to her generosity and kindness.