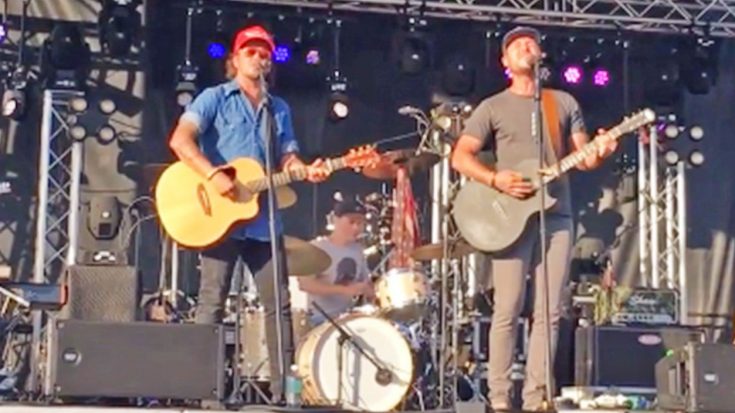 The duo that brought you the Top 10 songs “Runaway” and “Angel Eyes”, as well as the heart-wrenching ballad “Whiskey On My Breath” released one of their most meaningful songs yet just this year – “Love Wins”.

It was simply a concept when Love and Theft stopped by Storme Warren’s SiriusXM radio show The Highway. Warren loved the idea of “Love Wins” so much that he threatened to play their unfinished demo on the air for The Highway’s millions of listeners if they didn’t get into the recording studio and finish it.

Bandmates Stephen Barker Liles and Eric Gunderson went to the studio right away and cut the song. Liles revealed that he and Gunderson wrote the song as a reminder to be “better dads, better husbands, and just better humans.“

“We hope this song will have a lasting impact on the hearts of everyone who hears it,” Liles said in an interview.

With the tragedies our country has seen over the last couple months including the hurricanes in Texas, Florida, the Virgin Islands, and Puerto Rico, as well as the horrific Las Vegas shooting, it seems that the world may need this song now more than ever.

The song is a reminder to love those close to you as hard as you can for as long as you can – something Liles now knows all too well. Last week, he took to Facebook to reveal to fans that his mother, Susie, was recently diagnosed with ALS.

Because there is no cure for ALS, Liles knew he had to do something to help raise awareness. So, he teamed up with the ALS Association of Tennessee to put on a benefit in Susie’s honor.

Called Shine For Susie, the benefit will feature performances from Love and Theft, Flordia Georgia Line, Craig Campbell, Jerrod Niemann, and many more. It will be held at the Ryman Auditorium on Monday, December 4 at 7:30 PM.

Tickets to Shine for Susie are currently on sale. If you would like to purchase tickets, click here.

Watch their moving performance of “Love Wins” below.