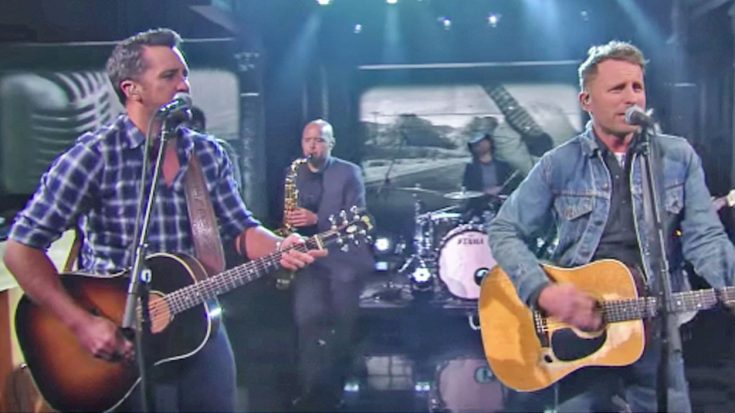 While promoting the upcoming ACM Awards, which they are hosting, Luke Bryan and Dierks Bentley stopped by The Late Show with Stephen Colbert to talk about their hosting rituals, nominees, and everything in between.

Colbert spoke about every country singer that has performed on his show that is nominated which includes Maren Morris, Chris Stapleton, Rascal Flatts, Kacey Musgraves, Miranda Lambert, Lady Antebellum, and Lori McKenna.

Bentley and Bryan, who are also nominees, are in their second year of hosting together and if this performance is a sneak peek at what’s to come, it’s definitely going to be a great show.

After being interviewed by Colbert, the two award-winning country singers performed a Merle Haggard hit.

“He’s an icon, we lost him last year, Haggard was such a diverse, his sound was so diverse. We’re doin’ it for the Hag,” Bentley said, introducing the song “Ramblin’ Fever”.

This isn’t the first time the duo has covered Haggard together. In 2014, they teamed up to sing his duet with Willie Nelson, “Pancho and Lefty” for the Merle Haggard tribute album Working Man’s Poet.

Backed by Colbert’s house band, Jon Batiste & Stay Human, Bentley and Bryan made Haggard proud with their rendition of his 1977 hit. If you think the singing is good, just wait until the musical break in the middle where Batiste plays the melodica like it’s nobody’s business!

Watch them perform “Ramblin’ Fever” below.