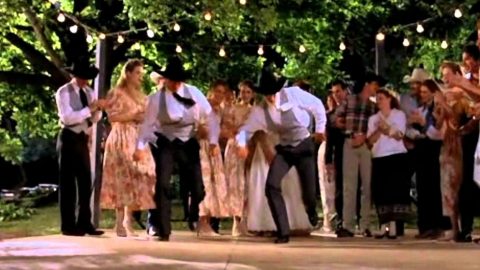 Nearly 30 years ago, bull rider Lane Frost died after a ride at the Cheyenne Frontier Days Rodeo in 1989. While riding a bull named “Takin’ Care of Business,” Frost dismounts after his 8-second ride, but the bull comes after him, goring him in the side. Frost suffered some broken ribs and a severed main artery. As a result of excessive internal bleeding, he died on the arena floor.

Five years after his death, Frost was honored with a biographical movie about his life and untimely death. The film, titled 8 Seconds, starred beloved Beverly Hills 90210 actor Luke Perry in his feature film debut in the lead role of Lane. “He was a very humble champion and he was comfortable and well-suited to the spotlight in a way that few people are. The thing I learned about Lane that I was impressed with the most was that he was a great friend,” Perry said about Frost. “Everybody said Lane was a great guy to be friends with. All bull riding stuff aside, I value my friends very highly and a true friend in this life is hard to come by, and you should treasure them. He was a good friend to a lot of folks and that was great to hear.”

8 Seconds follows Frost’s career, his marriage to Kellie Kyle and his untimely death. Perhaps one of the most moving story lines of the film is Frost’s friendship with Tuff Hedeman, portrayed by actor Stephen Baldwin. Frost and Hedeman were such close friends that Tuff named his first born son after the deceased bull rider. Tuff Hedeman was often on hand during the filming of 8 Seconds and acted as a stunt double for Stephen Baldwin.

8 Seconds produced one of the most beloved soundtracks for country music fans as it featured performances from Brooks & Dunn, Vince Gill, Pam Tillis, Billy Dean and Reba McEntire.

One of the movie’s most iconic and recreated scenes takes place at Lane and Kellie’s wedding when country star Vince Gill and Karla Bonoff take the stage  to perform the toe-tapping, dance-worthy tune “When Will I Be Loved.” The song kicks off a dance floor battle between Luke Perry (Lane Frost) and Stephen Baldwin (Tuff Hedeman) that has become popular among wedding parties over the last two decades.

While many have tried to mimic the dance, it’s tough to beat the original. Check out the video below or click here to watch.