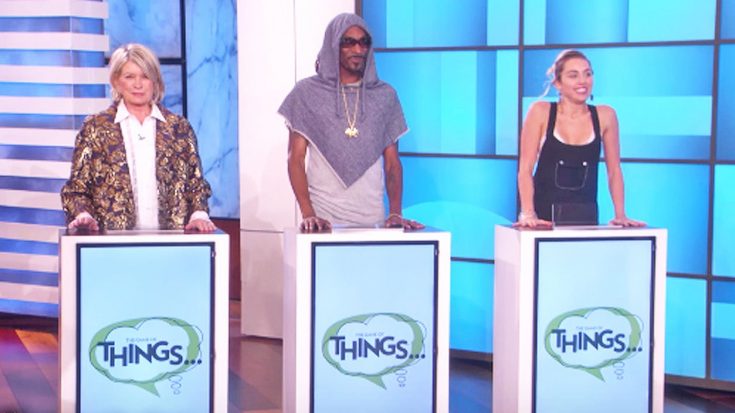 Ellen DeGeneres invited her “aunt” Martha Stewart, her “cousin twice-removed” Snoop Dogg, and her “twin sister” Miley Cyrus all over to play her favorite Thanksgiving game.

The “family” played Parker Brothers party game, “The Game of THINGS”, in which players write down a personal response to a topic card and then take turns guessing who belongs to each unique response. You would expect to hear a wide range of responses when you round up such an eclectic group, but as it turns out, they surprisingly have a whole lot in common!

When asked “What would make this game more fun?” the three answered a “marijuana,” “cannabis,” and “drugs.” A tough group of responses for sure, but the talk show host was shockingly able to match up each to their respective owner.

Stewart has made her return to television with the help of rapper Snoop Dogg. The two unlikely friends currently play host to their very own high class cooking show, Martha & Snoop’s Potluck Dinner Party, airing on VH1.

What do you think of their responses? Were you surprised?