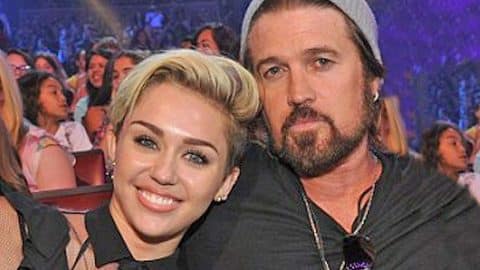 While on a talk show in Nashville Tennessee in 1994, Billy Ray Cyrus was talking about his music when an unexpected guest crashed the stage.

His daughter, Miley Cyrus, who was just two-years-old at the time of the interview, walked up to the stage adorably pushing a doll in a stroller.

The hosts invited her up on stage and as everyone applauded, she stopped what she was doing, turned around, and applauded too!

Once everyone got settled in their seats again, the hosts noticed something in her stroller and it wasn’t your typical doll.

Billy Ray stepped in to explain the interesting looking doll in the stroller.

“My mom loves Willie Nelson, and I was getting my mom the Willie Nelson doll for Christmas,” he explained. “I got it out of the box and Miley seen it, and she took this crybaby doll that she had and threw it out of the buggy, and put Willie in there. Everywhere she goes, she takes Willie with her!”

Miley definitely steals the show with her cuteness and even shows off a special skill!

Not sure if Nelson knows that he was Miley’s first boyfriend, but we’re sure he’d get a kick out of it.

The father-daughter duo will reunite for a song on Billy Ray’s new album Thin Line, which will debut on September 12. Make sure you preorder it on iTunes here or Amazon here!