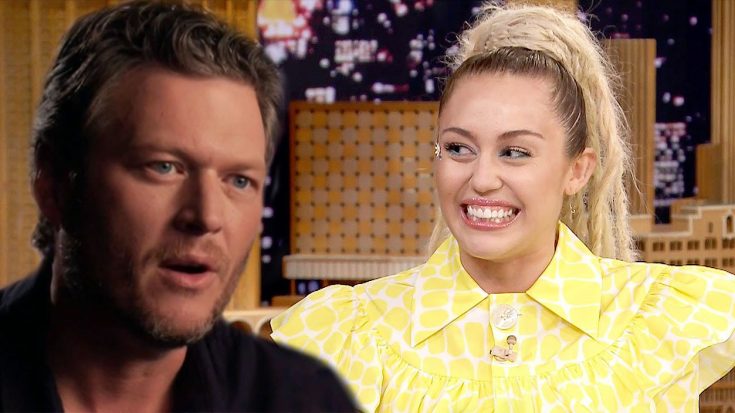 Singer and Voice coach Miley Cyrus dished some dirt on her rival Blake Shelton, revealing a juvenile secret that had fans in tears of laughter! Cyrus has been more than eager to reveal that her father, country icon Billy Ray Cyrus, will be her mentor during her upcoming NBC season, prompting the country gal to throw a bit of humorous shade to her southern competition.

Cyrus is hoping to bank on Shelton’s former obsession with her father as an opportunity to leave the country boy as starstruck as possible! Although admitting that her father has been one of her greatest mentors throughout her life, she laughed, “AND I’m coming for Blake, so that’s why! I’m bringing in dad.”

In a twist of events, the singer shamelessly addressed Shelton’s former high school nickname, saying, “By the way, they called Blake ‘Achy Blakey’ in high school, because he was such a Billy Ray fan. So, now I’m coming for him with the O.G.“

Shelton and Cyrus have been known to hilariously stand their ground and poke fun at one another during their previous Voice experiences. Perhaps Shelton’s mullet days were inspired by Billy Ray himself? Be sure keep an eye on the next season of The Voice for endless laughs and riveting competition.