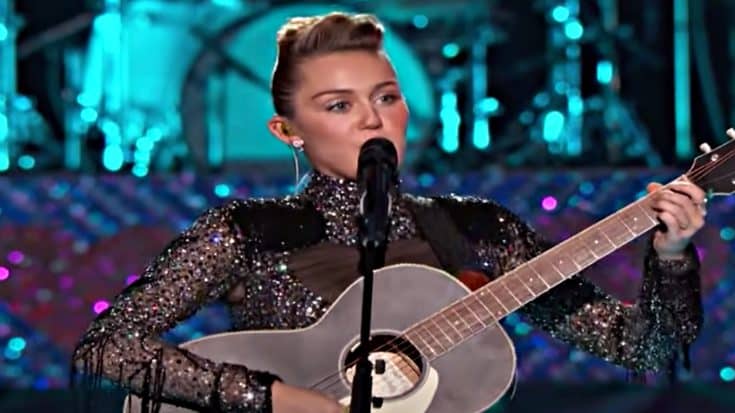 Miley Cyrus is still quite young, but she is already somewhat of a chameleon.

During every stage of her life, her music is completely different than the last. Her album Younger Now was released in September 2017, and it’s her most country roots-inspired yet.

Cyrus has deep country roots, being born and raised in Nashville to a country star father and having the legendary Dolly Parton as a godmother.

She proudly showed those roots off on the album and in every event she performed at since its release.

Cyrus was one of the many performers at the iHeartRadio Music Festival in Las Vegas in 2017, and she included a few covers as well as performing hits and new songs off Younger Now in her set.

One of those covers was a well-known song that was originally released many years before she was even born! Singing the Nancy Sinatra hit “These Boots Are Made For Walkin’,” which her father Billy Ray Cyrus actually recorded in 1992, Cyrus strummed her guitar and blew the entire arena away.

Her raspy tone was perfect for the song. This version of Miley is a fan-favorite so far, but we’ll just have to wait and see what she has up her sleeve next. Watch her performance of “These Boots Are Made For Walkin'” below.