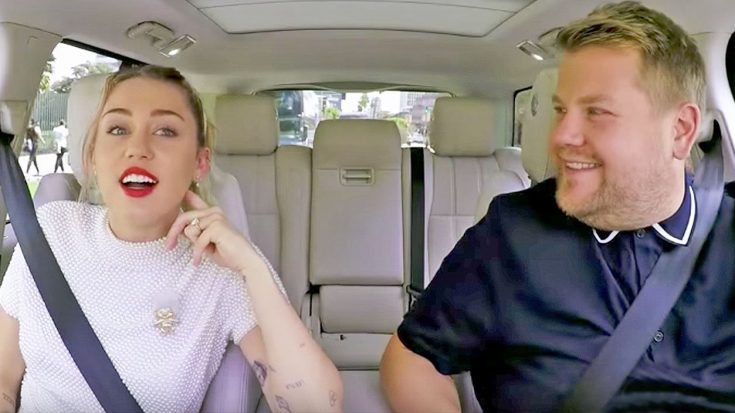 As a followup to the Cyrus family’s episode of “Carpool Karaoke” released exclusively on Apple music, Miley Cyrus sat shotgun next to talkshow host James Corden for her very own segment of the singing series.

In between singing some of her biggest hits released over the course of her career, Miley and Corden discussed some of her past decisions and whether or not her infamous love of smoking marijuana had an influence. Playing a game Corden coined “High or Not High,” the talkshow host asked the “Younger Now” singer whether or not she was high the first time she heard father Billy Ray Cyrus’ iconic “Achy Breaky Heart.”

“First time you listened to ‘Achy Breaky Heart?” asked Corden with a smirk.

Miley made the decision to quit both alcohol and marijuana after noticing the people she was surrounding herself with weren’t encouraging her to better herself. Additionally, the singer explained she felt the lifestyle change necessary for her to fully transition out of her “Dead Petz phase.”

“I like to surround myself with people that make me want to get better, more evolved, open. And I was noticing, it’s not the people that are stoned. I want to be super clear and sharp, because I know exactly where I want to be,” Miley shared in an interview with Billboard back in May 2017.