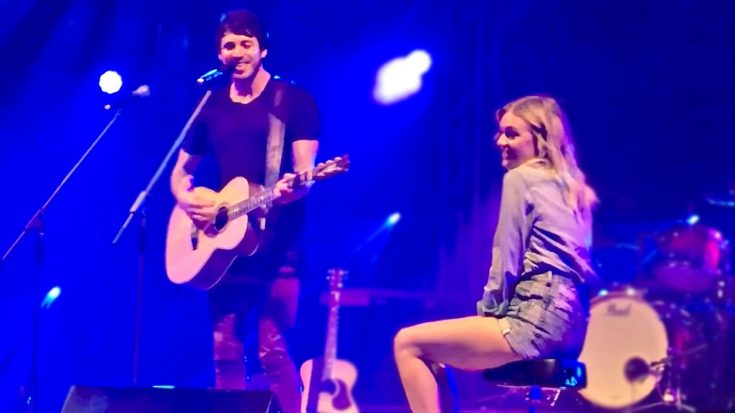 As one of the brightest stars in country music today, Kelsea Ballerini was given the opportunity in March 2016 to travel to Australia to co-host an awards show. She had no idea that show would also be the place where she would meet the love of her life.

Ballerini’s co-host for the awards show was Morgan Evans, an Australian country music singer and songwriter. The two of them found themselves falling head over heels for each other at the afterparty, and the rest is history.

The couple got engaged just a few months later, on Christmas Day in 2016. From there, they began planning their wedding, which took place on December 2, 2017.

Ballerini and Evans were married during a beachside ceremony in Cabo San Lucas, Mexico in front of 100 guests. Lady Antebellum‘s Charles Kelley, who was one of Ballerini’s former tourmates, was one of the guests in attendance.

Fans got to take a peek into Ballerini and Evans’ wedding through photos Ballerini shared on social media. The first one she shared came equipped with a caption that proved how deeply in love she is with her new husband.

heading home from the most magical Love-filled week of my life getting to marry the best person I know in front of our people and the ocean. doesn’t even feel like real life. can’t wait to share more with you. ??#imawifey

After enjoying their honeymoon, the couple returned home and got right back to work. Days after their wedding, Evans released a new song to radio, appropriately titled “I Do.” On Instagram, Evans described the song by saying, “Wrote it about my girlfriend. Recorded it about my fiance’. Releasing it about my wife.”

A small group of fans got the chance to watch Evans sing “I Do” to Ballerini for the first time since they married. Ballerini took a seat next to Evans on the stage, and looked on adoringly as he sang straight to her.

Ballerini’s love for her husband was made clear as she listened to him sing “I Do.” She mouthed the words to the song while Evans sang, and started dancing around in her seat with excitement.

Much to the crowd’s delight, the newlyweds shared a sweet embrace and a quick kiss before Ballerini dashed behind the stage again. Can y’all say aww?

If you need a reason to smile today, this video will give you one. These two are so in love!