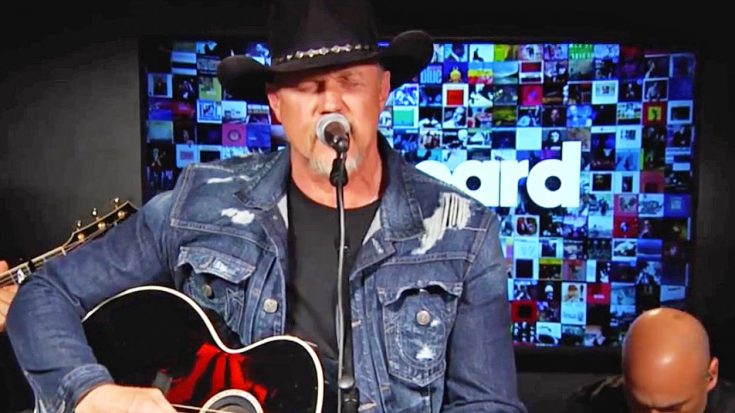 After 30 years in the business, Trace Adkins has certainly generated his fair share of hit songs. The country superstar has no plans of slowing up, and is eyeing his next big hit with his current single, “Watered Down.”

Released off of his brand-new album Something’s Going On, “Watered Down” is the perfect fit for Adkins at this time in his life. The song is written from the perspective of someone who has experienced some wild times, and still has a bit of a rebellious streak inside. But now that they’re older, they realize the importance of slowing things down a bit.

This is something that Adkins mentioned when he joined Billboard in March for a session to celebrate the release of Something’s Going On. Before he moved into the new stuff, Adkins decided to dish out a couple of his greatest hits, starting with the rowdy “Ladies Love Country Boys.”

Released in 2006, “Ladies Love Country Boys” topped the U.S. Hot Country Songs chart, making it the second number one hit of Adkins’ career. It also managed to cross over to the pop chart, where it peaked at the 61st spot.

Finally, Adkins wrapped the whole medley up by delivering a powerful performance of “Watered Down.” We couldn’t think of a better way for him to conclude his career-spanning medley!

Tune in below to watch Adkins’ medley in full. Which of the three songs is your favorite? If it’s “Watered Down,” then be sure to download Something’s Going On so you can listen to it wherever you go. Get a copy here!

Always dream of catching Trace Adkins in concert? Well it’s time to make that dream come true! Trace is on tour all summer and fall, and he’s coming to a city near you! – Don’t miss your chance to see him LIVE! Tickets always sell fast for a superstar like Trace, so make sure you get yours now by clicking here!