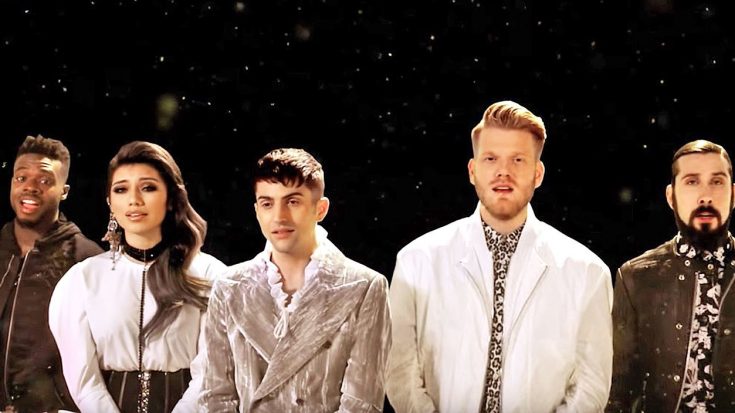 Ever since they won The Sing-Off in 2011, Pentatonix has been gracing us with their outstanding covers. They generally stick to pop hits, but are also well-known for their renditions of beloved Christmas classics. They’ve even ventured into the rock world, releasing a chilling video for the Queen hit “Bohemian Rhapsody.”

Proving their versatility, the members of Pentatonix have also tried out country covers. In 2016, the group collaborated with Dolly Parton on a new arrangement of her hit “Jolene,” and ended up winning a Grammy for their rendition.

Now, the group has delivered another Grammy-worthy performance with their cover of an Elvis Presley classic, “Can’t Help Falling in Love.”

Elvis was the first artist to record the timeless love song, which was featured in his 1961 film, Blue Hawaii. His version went on to claim the top spot on the U.S. Adult Contemporary chart.

The popularity of “Can’t Help Falling in Love” prompted many other artists to record the song themselves. Some notable artists who have recorded the song in the past include Bob Dylan, Neil Diamond, and Twenty One Pilots.

The group released a music video to go along with their cover of “Can’t Help Falling in Love.” They took a simple approach with the video, which was filmed against a black background and included close-up shots of each member as they sang. This simplistic approach gives viewers the chance to focus solely on their vocal performance, which is phenomenal to say the least.

As always, the cover showcases Pentatonix’s breathtaking harmonies. They blend their voices together beautifully, creating a dazzling cover that Elvis would have been proud to hear.

Go ahead and tune in below to catch Pentatonix’s cover of “Can’t Help Falling in Love.” It’s sure to win your heart!