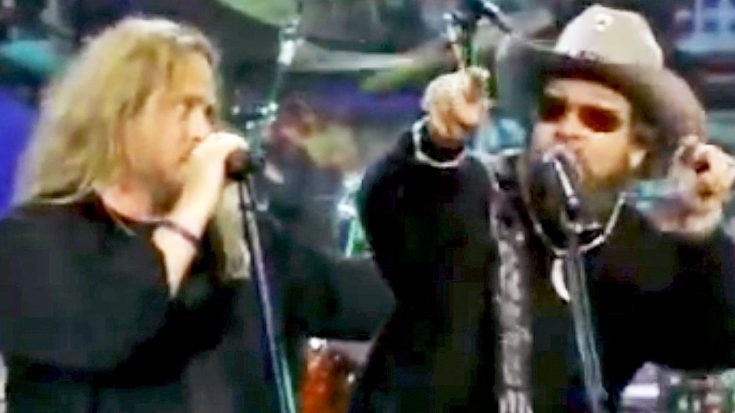 Hank Williams Jr. and Lynyrd Skynyrd…two of the most iconic artists in history with careers stretching back for generations. Both blend elements of Southern rock, country, and blues in their music, giving them immense crossover appeal.

The two artists have made their respect for one another clear, and Hank even offers a shout-out to Skynyrd in his song “My Name is Bocephus.” But beyond that, they two have teamed up to collaborate on numerous occasions.

You may not know this, but Skynyrd and Hank have actually toured together before! The two embarked on a co-headlining tour in 2007, and people are still talking about it after all this time.

Another thing that we’re still buzzing about is Hank and Skynyrd’s performance on The Late Late Show right before they took off on tour together. With Skynyrd’s lead vocalist Johnny Van Zant and Hank taking turns on vocals, everyone broke out into one intense version of the Skynyrd classic “Gimme Three Steps.”

Released in 1973, “Gimme Three Steps” was included as a track on Skynyrd’s debut album (Pronounced ‘Lĕh-‘nérd ‘Skin-‘nérd). The rowdy tune has always been a favorite among Skynyrd fans, so it seemed like the perfect choice for them to perform with Hank.

After a while, Johnny moved back and let Hank take control of the song. He tore into the second verse with a mighty roar, and kept that energy going as the performance chugged along.

Do you remember when Hank and Skynyrd played this killer version of “Gimme Three Steps?” Whether you do or not, you should definitely check it out in the clip below. Trust us, you’ll be glad you did!