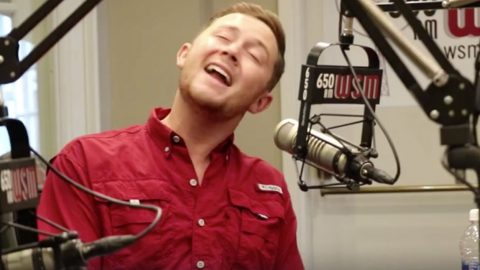 Scotty McCreery has been makin’ the ladies swoon with his deep, country voice since his debut on American Idol in 2005. Since then, his tone has only matured and he continues to get better and better.

While appearing on the WSM radio show Coffee, Country & Cody, McCreery covered one of his favorite Elvis Presley hits, which he actually sang when he was competing on the tenth season of American Idol.

Looking as relaxed as ever, McCreery belted the swoon-worthy lyrics of “That’s All Right, Mama” into the radio station’s microphone.

Throughout the performance, McCreery couldn’t help but smile, so you could tell he was thoroughly enjoying what he was singing, and we were too!

He ended his performance with Elvis’ classic line, “Thank you, thank you very much,” sounding very similar to The King himself!