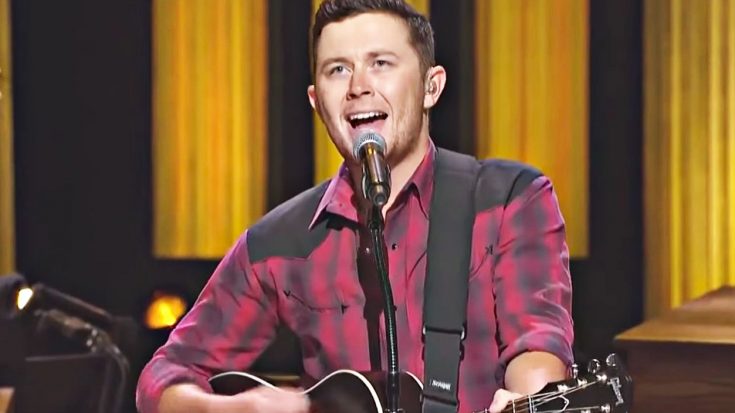 Throwing it back to the oldies with one of Alan Jackson‘s most popular songs, young Scotty McCreery sweeps the room with this rowdy and upbeat cover of “Chattahoochee.”

Appearing on stage at the House of Blues in Myrtle Beach, South Carolina, McCreery opens up a medley of oldies hits with this charming classic chart-topper.

First released in early 1993 as the third single from Jackson’s album, A Lot About Livin’ (And a Little ’bout Love), “Chattahoochee” became a No. 1 country hit and broke out into the Top 50 on Billboard’s Hot 100.

Penned as the result of a co-writing session with the goal of writing an upbeat tune, “Chattahoochee” was inspired by songwriter Jim McBride’s single line, “Way down yonder on the Chattahoochee”. The song itself is about growing up, having fun, and what it’s like to be raised in a small town.

Beyond being a raging success on the country charts for Jackson, the song also earned him two CMA Awards for Song of the Year and Single of the Year.

With its roots deeply drawn from Southern experiences and lifestyles, there is no doubt why McCreery chose to cover this during his visit to Myrtle Beach – plus, the crowd always loves a fun-filled opener!

Check out Scotty McCreery’s killer cover of Alan Jackson’s “Chattahochee” in the video below!