She Said What?! Kelly Clarkson Reveals How She Gets Blake Shelton’s Manager To Root For Her 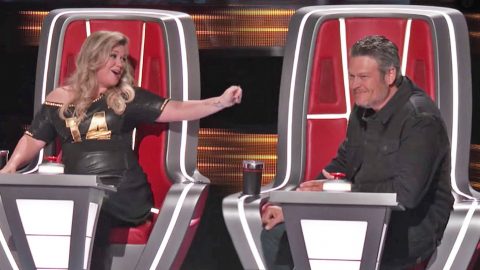 They say to keep your friends close and your enemies closer. It seems that at least for this season of The Voice, that’s exactly what Kelly Clarkson and Blake Shelton are doing. The two singers have known each other for a very long time and consider each other close friends.

In fact, one of the reasons Clarkson joined The Voice was because of the “I’ll Name The Dogs” singer. Her family’s schedule was always set around the show’s filming schedule anyway because her husband, Brandon Blackstock, just so happens to be Shelton’s longtime manager.

Since Blackstock represents one coach and is married to another, PEOPLE Magazine was wondering who he cheers for! Does he choose his client or his wife? Luckily, they caught up with both Clarkson and Shelton to get some answers.

“He’s like Switzerland,” Clarkson said, implying that he will stay neutral about his support. “I always do say though that at least I put out — so unless he’s doing something I don’t know about, I should win!”

While Shelton would obviously like the support of his manager, he also knows that Clarkson and Blackstock have four children and a five-year marriage.

Shelton added, “If I fire Brandon, it’s one thing. If she fires him, it’s going to be real bad. He knows who to suck up to.”

In the premiere episode, Clarkson put up some good arguments for country singers. Despite their fighting on the show, Clarkson does admire Shelton.

“He makes jokes but he really does help people after the show, and I’d like to do that as well,” she said.

Watch Clarkson and Shelton fight over 14-year-old Brynn Cartelli in the video below.