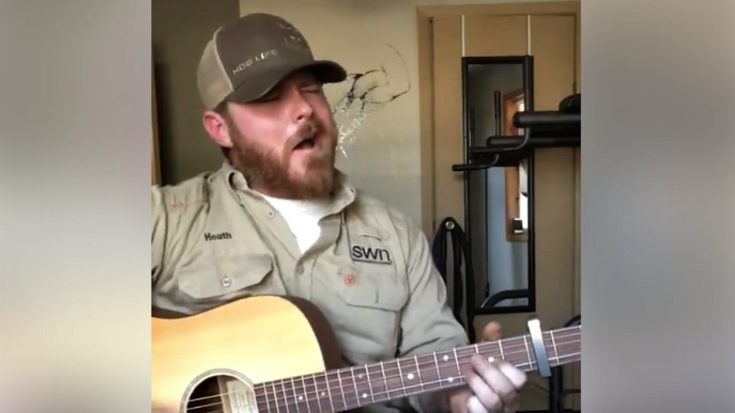 In 2015, Chris Stapleton‘s career skyrocketed after winning nearly every major award at the CMA Awards and delivering a jaw-dropping performance of the George Jones classic, “Tennessee Whiskey,” alongside Justin Timberlake. Within two days, Stapleton’s cover sat atop the Billboard country charts, a surge that launched Stapleton to superstardom.

During the 2018 Grammy Awards, Stapleton continued his epic reign by taking home three golden gramophones. One of those trophies was for Best Country Solo Performance for his hit “Either Way.” Just like every song Stapleton has released before, “Either Way” has become a popular cover tune for country music lovers. While we’ve seen numerous renditions of the song on social media, we believe we’ve found the best and it comes from an unassuming and unsuspecting oilfield worker from Arkansas.

By day, Heath Sanders is a Field Operator for Southwestern Energy in central Arkansas. By night he’s a singer….and a darn good one at that! In a video posted to his Facebook page, Sanders dons his work gear while showing off his impressive guitar skills and flawless vocals to “Either Way.”

According to his social media pages, Sanders stays busy singing in small venues near his Arkansas home. But, after hearing his incredible voice we think you’ll agree that the world needs to hear him!

Check out Heath Sanders singing “Either Way” in the video below. Then check out his fan page to hear more by clicking here.