Spice Up Your Life With Hank Jr.’s Explosive Performance Of ‘All My Rowdy Friends’ 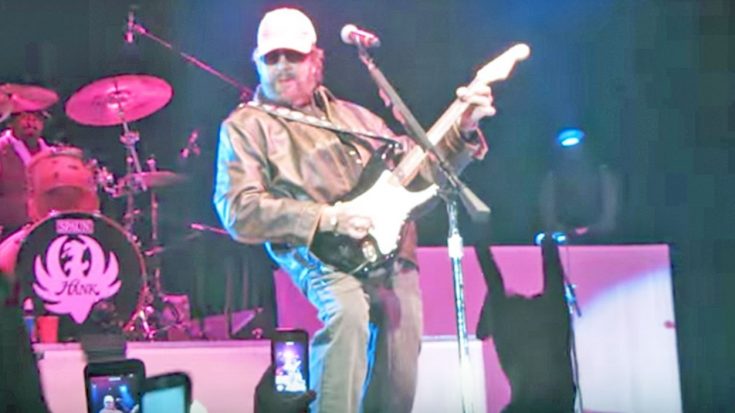 Every time we hear this song, we wish we were one of Hank Williams Jr.’s rowdy friends. Luckily, when you see him perform live, you become one!

At this epic performance in Southaven, Missouri in 2015, Hank. Jr. delivered a rockin’ set including all of his hits, including “All My Rowdy Friends Are Coming Over Tonight”

As it says in the title, this song gets a little, okay a lot, rowdy with insane guitar solos, passionate delivery of lyrics and awesome fan interaction. Hank Jr. gets the audience to sing along during some sections of the chorus, but for the most part, Rowdy Randall shines on one of his most well-known songs.

“All My Rowdy Friends Are Coming Over Tonight” was written and released by Bocephus in 1984 as the second single of his album Major Moves. The epic music video earned the Music Video of the Year award at both the CMA Awards and the ACM Awards.

Hank Jr. commanded the stage with his large personality and huge talent. You can see fans recording his every move of their phones because he does things differently at each concert, so you never really know what you’re going to get!

Watch his explosive performance of “All My Rowdy Friends Are Coming Over Tonight” in the video below.

Only one date remains to see Hank Williams Jr. in concert this fall – at the inaugural Flambeau Fest! Don’t miss your chance to see him LIVE! Tickets always sell out fast for such a legendary singer, get yours now by clicking here!