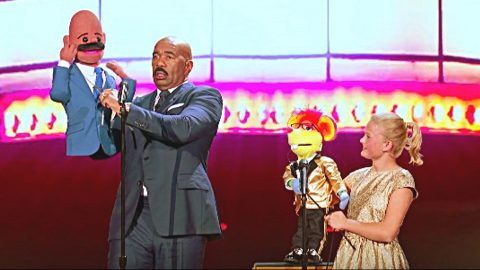 Long before Darci Lynne Farmer competed on and won America’s Got Talent, she had already won America’s hearts on another talent show. That show was Little Big Shots, the Steve Harvey-hosted program that showcases incredibly talented children, from singers, to dancers, and so much more.

Darci appeared on the show two years ago, when she was only 11 years old. She sang with her yodeling country girl puppet Katie, and wowed everyone who watched her.

She didn’t just perform for the U.S. version of Little Big Shots. She also crossed the pond to perform with Katie for the UK version of the show.

A couple of years and an America’s Got Talent win later, Darci made a grand return to Little Big Shots in the U.S. Her episode aired on Sunday night (April 8), and it was as spectacular as could be.

This time, Darci brought her mouse puppet Oscar along with her to sing the peppy song “Shout.” Within seconds, the entire crowd was on its feet, clapping and singing along.

But the audience members weren’t the only ones who got involved in the performance. Much to the delight of everyone watching, Steve came from behind the stage with a puppet of his own and started to perform with Darci.

Unlike his younger counterpart, Steve isn’t exactly a master ventriloquist. But he is a skilled comedian, and decided to use his skills as a funnyman to his advantage. How did he do that? By dancing a silly dance and making his puppet do the same!

Just that little bit of information should be enough to let you know that you have to see this performance. If you love everything Darci’s ever done, you may love this even more!