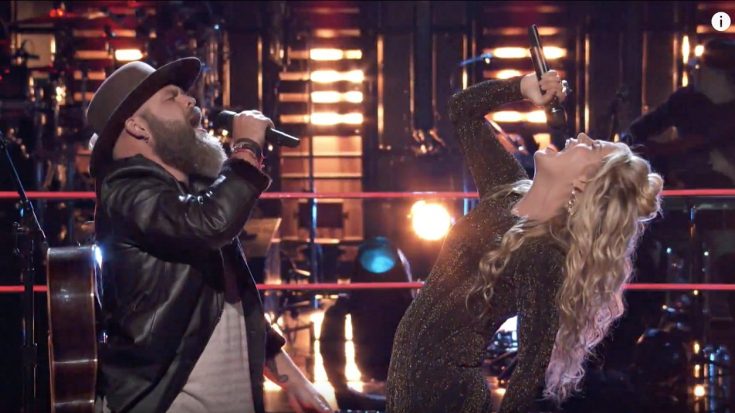 Season 13 of NBC’s The Voice is well underway and Tuesday night’s Battle Rounds proved that this is bound to be one of the show’s most intense seasons yet.

Coaches Blake Shelton, Adam Levine, Jennifer Hudson and Miley Cyrus worked with Rascal Flatts, Joe Jonas, Kelly Rowland and Billy Ray Cyrus respectively to prepare their teams for the Battle Rounds. Each coach pitted two of their team members against each other as they sang a song together. The coach then has a difficult decision to make…who stays and who goes.

Team Blake’s Adam Cunningham and Natalie Stovall took the stage for the night’s first Battle as they sang Little Big Town’s “Boondocks.” The singers traded line for line with similar vocal stylings making the choice a tough one for Shelton. Each of Shelton’s fellow coaches had already used their steals so Blake knew that the singer he didn’t pick had no chance of moving forward in the competition.

But, all is not lost for Natalie Stovall. A well known country fiddle player, Stovall has been a regular on the country music circuit for years and was a favorite to take home the ‘Voice’ crown after her impressive Blind Audition rendition of the Steeldrivers’ hit “If It Hadn’t Been For Love.”

We look forward to following Adam Cunningham’s ‘Voice’ journey over the next several weeks.

Watch Adam Cunningham and Natalie Stovall’s epic performance of “Boondocks” in the video below. Do you think Blake made the right decision?