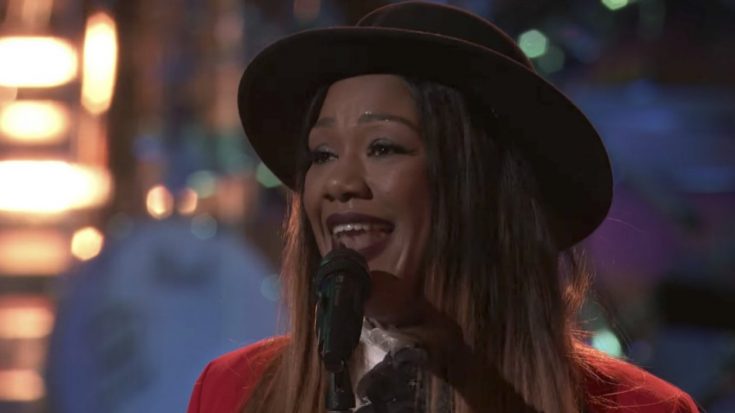 Keisha Renee. Remember that name because we predict she she’ll be standing on the Voice stage during the show’s Season 13 finale.

During Monday night’s Playoff episode, Renee delivered a one-of-a-kind rendition of one of country music’s most beloved songs, “Love Can Build a Bridge.” Renee’s soulful voice had the judges and audience entranced as she sang the popular lyrics to The Judds‘ classic.

The former backup singer for Nicki Minaj was one of only six members of Team Blake left in the competition prior to Monday’s eliminations, and each week she reminds us why all four judges were fighting over her during her Blind Audition.

“Sweetheart, you are the bridge of gospel and country all together,” said coach Jennifer Hudson.

“I have never heard a version of that song anything like that. It’s never happened. As dumb as Blake is in most ways, I’m not sure he’s dumb enough to let you go,” said Adam.

Blake agreed with his fellow judges. “This is what I envisioned back in the Blind Auditions — you bringing these kind of moments to this show. That song is iconic in country music, and you took it to another level.”

Blake was forced to cut his team in half Monday, and we’re thrilled to know that we’ll be hearing a lot more from Keisha Renee in the coming weeks as Blake chose the singer to move forward.

Watch Keisha Renee sing “Love Can Build A Bridge” in the video below.