By Miranda Raye on March 16, 2017
Advertisement 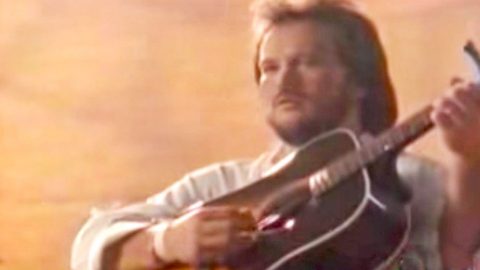 Members of the military no doubt sacrifice a lot for their country. Travis Tritt brought attention to the immense sacrifice veterans make overseas as well as the difficulties they face once they finally return home in his powerful music video for “Anymore.”

Co-written by Tritt, “Anymore” was released in 1991 as the second single off of his album It’s All About to Change.

The song’s emotional message resonated around the world, and it topped the charts in both the U.S. and Canada.

The music video for “Anymore” further enhances the emotional nature of the song. Directed by Jack Cole, the video shows Tritt playing the role of a wheelchair-bound Vietnam War veteran named Mac Singleton. While his physical injuries are hard to live with, the emotional scars from the war plague Singleton even more.

During his time in recovery, Singleton suffers from horrific nightmares about the war. He is never able to find peace, because the nightmares return one night after the next.

Singleton is finally able to find comfort and support in a fellow veteran named Al. With his new friend’s help, Singleton is able to push through his recovery.

In addition to his nightmares, Singleton struggles with finding the courage to get in touch with his wife, Annie. Too afraid to tell her about the life-changing injury that he suffered in the war, he pretends that he doesn’t love her.

But by the end of the video, he’s finally tired of pretending, and decides to return home to her.

The video for “Anymore” had a profound impact on those who watched it unfold. So much in fact, that CMT named it as the 64th greatest country music video of all time.

The success of “Anymore” led to the creation of a three-part music video series, with the other two videos in the series being for “Tell Me I Was Dreaming” and “If I Lost You.”

If you’ve seen the video for “Anymore” before, then you know it’s worth watching again. As for those of you that haven’t, be prepared, because it is one emotional roller coaster. But that’s what makes it so outstanding.

Watch the music video for “Anymore” on Tritt’s official Facebook page here. We’ve also included a live performance of the song for you to watch in the video below.