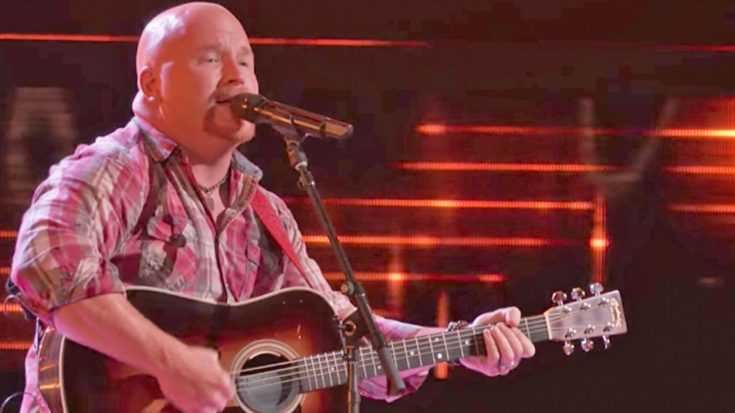 This may just be the most country contestant to ever take the stage of The Voice! 40-year-old Red Marlow sparked an epic battle with a his rendition of John Anderson‘s ’80s hit, “Swingin’.”

The construction worker – whom is described to be “as country as it gets” –  currently resides in Tennessee, making his trek out to Los Angeles in hopes of building a career in country music. Marlow’s delivery of Anderson’s southern ode to making moves on the girl next door bled pure traditional country, the contestant expertly playing his red guitar throughout his performance.

“I love when I get to see someone more country than Blake [Shelton],” said Adam Levine following his audition.

“Well it is what it is,” Marlow responded with a smirk.

Levine then went on to explain to the contestant that if he thought there was even a chance he would pick him as his coach he would have turned his chair but he’s “not stupid.” However, fellow Voice judge Miley Cyrus wasn’t about to go down without a fight.

“You may already have this set that you want to go to Blake, but I’m a strong fighter,” she pleaded to Marlow. “I came here to this season because I want to bring a new face to country music. When I grew up, I sat with Waylon Jennings. I sat with Dolly Parton. I took notes. I’m here to win The Voice with a country artist, and Red, you’re as country as they get.”

After Cyrus made her pitch to the contestant to fill in the spot of a male country artist on her team, Marlow revealed that he and the country superstar met years ago during Shelton’s mullet days. Following his mind-blowing story, it was time for Marlow to make a decision.

Not wanting to “monkey around,” Marlow thanked Cyrus for the kind words before ultimately joining Team Blake.

You can watch Marlow’s audition below.