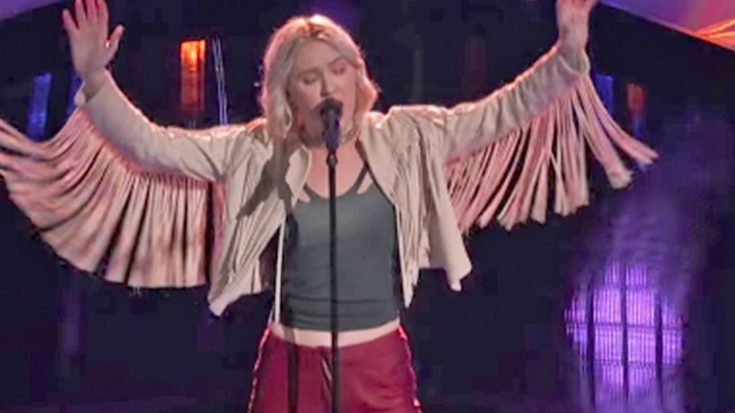 While they played relatively nice in the beginning, Voice coaches Blake Shelton, Adam Levine, Miley Cyrus, and Jennifer Hudson are pulling out all the stops to snatch the best contestants in the final rounds of the blinds.

Proving to be a contestant to watch this season, this 23-year-old Nashville-native drops jaws with a sassy rendition of Fleetwood Mac‘s 1977 hit, “The Chain.” The rocker’s psychedelic rendition of the classic rock song earned three chair turns, Hudson, Cyrus, and Shelton locked and loaded to fight to the death for the fiery blonde.

Even though each coach put up a valiant fight for Kohanski, the contestant came into the competition with one coach already on her mind.

“Look, my dad had me listening to Stevie Nicks, riding around in his truck always,” Cyrus shared with the Nashville rocker. “I kind of aspired to be like Stevie. And just turning around and seeing your style, it feels like you really know who you are. And my foundation is knowing who I am. We’ve got a very similar range so I think I know songs that would be great for you because they’re songs that would probably end up working for me, too.”

While Cyrus’ pitch was impressive, turns out she didn’t need to try so hard to sway the young vocalist. After thanking each of the coaches for their kind words, Kohanski revealed she’s “obsessed with Miley” and has to choose the “Younger Now” singer as her coach.

On NBC’s contestants page, Cyrus is listed as one of Kohanski’s musical inspirations growing up. “I really wanted her to turn her chair for me,” she shared in an interview with Wilson Post. Prior to auditioning for The Voice, Kohanski went to college on track to be an English teacher before deciding to risk everything and pursue a career in music.

You can watch her rendition of “The Chain” below.