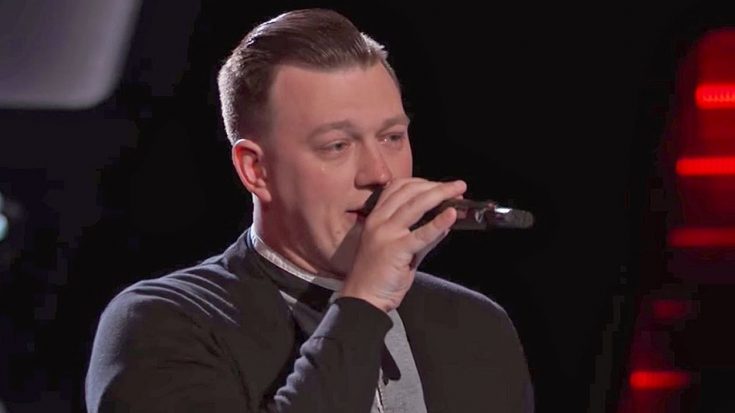 Every now and then, someone decides to make their first impression on The Voice by performing on of the coaches’ songs. That’s exactly what one hopeful contestant named Gary Carpentier did when he showed up for his blind audition.

The song that Carpentier selected to sing was “Home,” which was co-written and originally released by Michael Bublé in 2005. His version of the song was a number one hit on the Billboard Adult Contemporary chart.

Three years later, Blake Shelton turned the song into a country track when he released it off of his album Pure BS. His rendition was also successful, and reached the top spot on the Hot Country Songs chart.

Carpentier’s performance veered more toward Bublé’s style, and his silky-smooth vocals instantly caught the attention of all of the coaches. However, the only one who could turn around was Adam Levine, since all of the other coaches’ teams were full at that time.

With only one coach available to turn for him, Carpentier had to make a good impression. It must have been his lucky day, because Levine heard something in his voice that prompted him to turn around long before he was ever done with his audition.

The significance of Levine turning his chair for him was not lost on Carpentier. In fact, he had an immediate reaction to seeing Levine turn around, and fought for a while to regain control of his emotions as he continued with the song.

Since the other coaches liked what they heard as well, they began peeking around the backs of their chairs to take a look at Carpentier. Shelton even started singing along, creating a mini duet with Levine’s new team member.

Carpentier could no longer hold back his tears once he finished singing. Levine joined him up on the stage, and proudly declared that his team was officially full!

Tune in to the clip below to watch Carpentier charm the coaches on The Voice with his rendition of “Home.” We look forward to seeing what he’ll do next!