With Nothing But His Voice & Guitar, Hank Jr. Exposes Heart & Soul Through ‘Just Call Me Hank’ 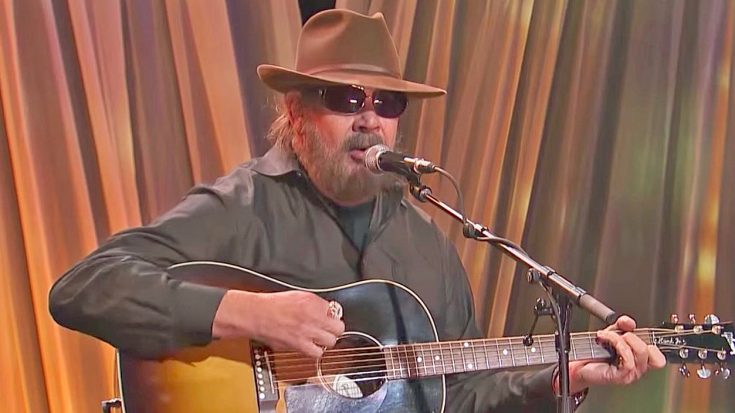 Hank Williams Jr. was driving to his Tennessee farm at 7:15 in the morning when an idea for a new song popped into his head. He pulled over the truck and started to write, and he said the song came to him within five minutes.

During an interview with Rolling Stone, Hank Jr. said that he called some people to tell them about the song he just wrote, and it was an emotional moment for all involved:

“I called a guy who’s been with me a long time, I gave him some words, then I called daughter Holly and gave her some words. This guy is bawling, Holly’s bawling, I’m bawling…everybody is bawling.”

The song that Hank Jr. wrote that day was “Just Call Me Hank.” He eventually included the song as one of the tracks on his 2016 album It’s About Time, and it stood out to fans right away.

“Just Call Me Hank” is about as personal as it gets, as Hank Jr. uses the song to look back on his life and career. He acknowledges the fact that people don’t need to call him an “icon” like they tend to do. Instead, he says that it makes him “really proud” when someone simply calls him “Hank.”

Following the wildfires that raged through Tennessee in November 2016, Dolly Parton championed a telethon for her My People Fund, which she established to help those affected by the fires. Hank Jr. signed on to perform at the telethon, which gave him the perfect opportunity to deliver an acoustic performance.

With nothing but his voice and his guitar, Hank Jr. took to the stage and delivered an intimate performance of “Just Call Me Hank.” Through that performance, he further proved that he doesn’t need a full band or any glitz and glam in order to make an impression.

In fact, Hank Jr.’s choice to go acoustic for his performance made it one of the standout moments of the telethon. It allowed him to truly expose his heart and soul through the song, which made it more meaningful to watch.

Tune in below to catch Hank Jr.’s stripped-down performance of “Just Call Me Hank.” This shows why he’s still regarded as one of the greatest country artists out there!