By Jennifer Pernicano on June 28, 2019
Advertisement 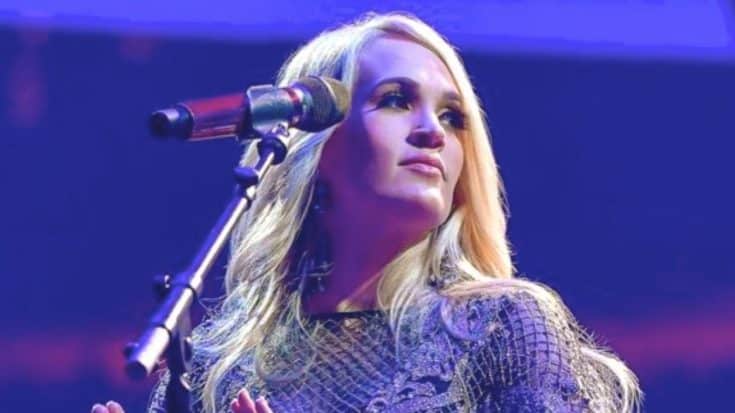 During the CMA Awards, hosts Carrie Underwood and Brad Paisley always sing their monologue. They change the words to popular songs and make it about popular culture, their fellow country stars, and sometimes they get political. Some might think they jab one political party more than the other, but the truth is…they go after both parties equally.

Back in 2013, they sang a hilarious song about the struggle of signing up for Obamacare called “Obamacare By Morning,” a play on the George Strait classic “Amarillo By Morning.”

In 2017, they sang a hilarious take on Underwood’s “Before He Cheats,” and changed it to rib President Trump with “Before He Tweets.”

Besides these political parodies, you don’t usually hear Underwood get political…until now.

On her album Cry Pretty, Underwood included an emotional ballad titled “The Bullet,” which is an extremely powerful song that references a shooting. She sings, “You can blame it on hate or blame it on guns. But mamas ain’t supposed to bury their sons. Left a hole in her heart and it still ain’t done. The bullet keeps on goin‘.”

Since the song’s release, people have taken it as her stance on gun control and politics, but she’s now coming out to let people know that was not her intention. She told Stellar Magazine last year, “It’s a beautiful and powerful song, and I thought for a long time whether or not I was the one to deliver its message. Unfortunately, too many events have happened and not just on a grand scale … any word I say right now is gonna be wrong.”

She ultimately decided to include it on the album because so many people would relate to it, “whether in the military, if they’re cops, or just people who were in the wrong place at the wrong time.”

In a 2019 interview with The Guardian, Underwood opened up about her stance on speaking about politics.

“I feel like more people try to pin me places politically,” she said. “I try to stay far out of politics if possible, at least in public, because nobody wins. It’s crazy. Everybody tries to sum everything up and put a bow on it, like it’s black and white. And it’s not like that.”

She also added that it does bug her that people try to force her to pick a side when she releases a song like “The Bullet” or do her CMA political parodies.

Safe to say Underwood isn’t going to endorse any candidate any time soon. She seems to want to be more like Dolly Parton, who doesn’t speak on politics at all, no matter how hard people try to get her to. Watch Parton’s stance on the subject below.