Carrie Underwood Has A Big Announcement To Make

By Miranda Raye on March 15, 2022
Advertisement 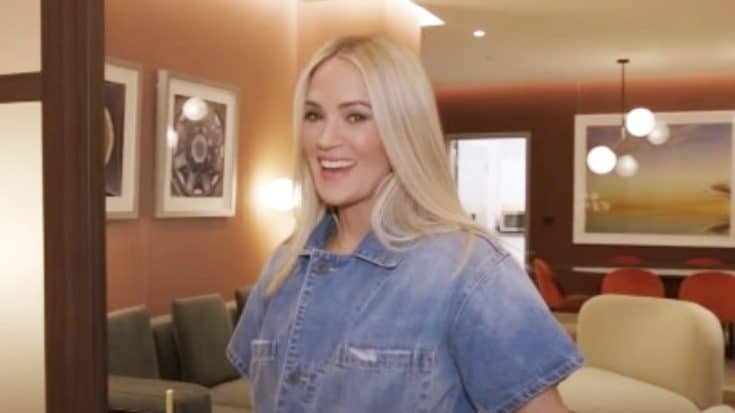 Backstage at the ACM Awards on March 7, Carrie Underwood teased the future release of new music. She said fans could expect to hear something from her “soon.”

“I mean, I’m always working on something,” she said. “Obviously we can’t spill too many beans right now, but my fans know what I mean when I say ‘soon.’ Soon. They actually hate it when I use that word because they’re like, ‘what does that mean?!’”

Not long after the ACM Awards, Underwood posted a photo on social media that shows her in the recording studio. She captioned it “So, I did a thing…“

When Underwood said to expect some news from her “soon,” she wasn’t kidding!

On Monday (March 15), Underwood posted a five-second teaser clip on social media. The teaser shows a purple background with floating smoke and specks of light. You can also hear a small piece of music when you turn the audio on.

The words “Coming Friday March 18” appear over the background in a white font.

Underwood captioned the teaser with the eyes emoji and nothing more. She’s clearly up to something!

On top of sharing this teaser, Underwood also changed her profile photo on her social media accounts.

The photo shows the silhouette of a person, presumably Underwood, against another purple background. Is this part of the album cover, perhaps?

Then on Tuesday (March 14), Underwood shared another teaser.

This teaser clip shows the same purple background as the other one. You can hear some more instrumental music in the clip, but no vocals.

At the very end, the words “Coming Friday, March 18” appear across the screen along with the title “Ghost Story.”

A few hours after sharing this second teaser, Underwood revealed that “Ghost Story” is her new single. She also shared its cover art.

The new song will be released on March 18…so this is what she had been hyping up for days!

If Underwood later announces the release of a new album, it will be huge news.

She released her gospel record, My Savior, in 2021 and dropped a Christmas record, My Gift, in 2020. Her 2018 album Cry Pretty was her last country release. Hard to believe that was four years ago!

On top of potentially releasing new music, Underwood is also preparing to perform her next set of shows for her Reflection residency at Resorts World Las Vegas. She returns to Vegas on March 23, so maybe she’ll have some new music to share by then!

Get a behind-the-scenes look at Underwood’s residency by tuning in to the video below.