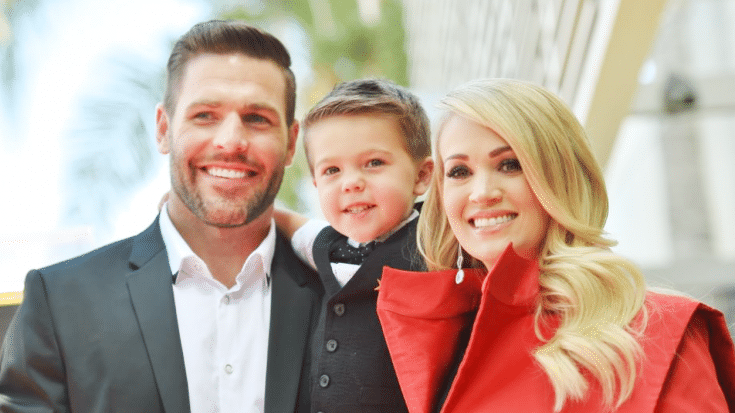 Carrie Underwood may be a country music superstar, but her husband, retired NHL player Mike Fisher, has his own powerful set of singing chops at well.

Fans of the couple got their first taste of Mike’s singing skills back in 2016. While driving, Mike heard Garth Brooks‘ hit song “The River” come on the radio and couldn’t help but sing along.

Carrie filmed his carpool performance, and the video has since been viewed well over a million times.

The video made its way to Garth, who was impressed by Mike’s singing skills. He invited him to come sing a duet, which prompted a jealous response from Carrie:

“You cannot sing with Garth Brooks before I do,’” Carrie said. “When I was 10 years old I met Garth Brooks and said, ‘If you ever need someone to sing a duet with you, I’m your girl.’ So I’ve been waiting for that forever. And my husband who’s a hockey player is gonna sing with Garth? I don’t think so! I might cry if that happens.”

A few months after Carrie shared the video of Mike singing, he finally got the chance to meet up with Garth for a duet on “The River.” Though it wasn’t quite what fans had hoped for, since it took place backstage.

Luckily, the duet was filmed, and it left fans begging to hear more music from Mike in the future (and to hear a proper duet with Garth).

How is it that my hubby, @mfisher1212 gets to sing with THE @garthbrooks before I do? As payback, I think I'll try to see if Wayne Gretzky wants to play a pick up hockey game sometime!

Even though all of that took place over two years ago, people are still anxious to hear Mike sing. Garth is one of those people.

The country megastar told members of the media in a late 2017 interview that he has kept trying to get Mike to sing with him again:

Well now it looks like maybe Mike is finally ready to place his singing chops on full display. Just weeks after Carrie released her latest album, Cry Pretty, Mike posted a new photo on Instagram that had fans in a frenzy about his own music career.

The photo shows Mike in a recording studio, appearing as if he’s singing. His caption certainly takes on a teasing tone, but it is hard to tell if he’s serious when he says that “new music is on the way.”

People have been waiting for forever to see Mike in the recording studio!

I know you guys have been waiting a long time but new music is on the way!! Stay tuned!

Knowing of Mike’s history of singing with Garth, fans were quick to flood the comments with hopes that the two will be recording a duet. Garth happens to have a new album in the pipeline, so now would be the perfect time.

Or maybe Mike is cooking up a future collaboration with his wife. After all, he’s made it clear that he knows her songs just as well as Garth’s!

Back in June, Carrie shared yet another carpool video with Mike. This time, he was tackling her song “Cry Pretty,” and doing so in a hilarious way. So hilarious in fact, that his singing prompted a few giggles from their three-year-old son, Isaiah.

You can watch that little performance in the video below.

What do y’all think of the photo Mike shared? Are you excited to see that he’s potentially recording a song?