By Miranda Raye on October 8, 2018
Advertisement 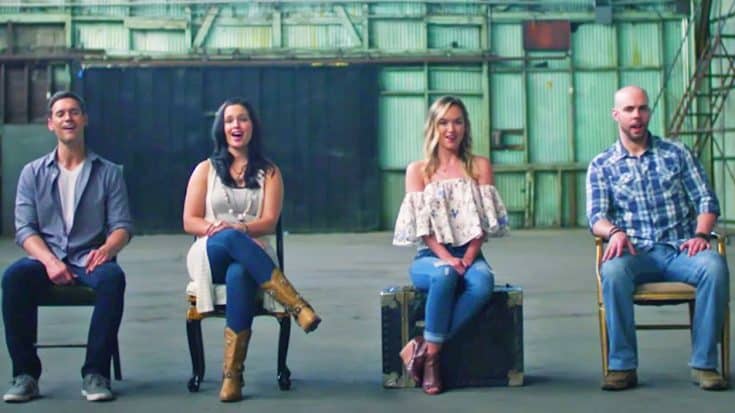 The country music community quickly fell in love with a talented a cappella group named Home Free after they won the reality competition series, The Sing-Off in 2013.

Since then, Home Free has generated millions upon millions of views with their original songs and YouTube covers, including one of Thomas Rhett‘s romantic hit, “Die a Happy Man.”

But ever since 2016, longtime fans of the group have had to get used to seeing baritone singer Adam Chance in the place of one of its founding members. After being with the group from the start, baritone harmony singer Chris Rupp announced he was leaving to pursue a solo career and other passion projects.

One of those projects included the formation of a new group called 7th Ave, which Chris brought together. His sister, Tristin, is also a member, and their friends Kelley Jakle and Adam Bastien round out the group.

Although they are still a fairly new group, 7th Ave has already released some impressive music videos. In July 2016, they released a gorgeous cover of Elvis Presley‘s iconic love song, “Can’t Help Falling in Love.”

Seated in a straight line inside of an empty warehouse, the simple setting directs your attention right at the four singers. But it’s not that hard to feel mesmerized by their talent, since their first note and every harmony have the power to send shivers down your spine.

There’s no other way to put it, this video is absolutely breathtaking. See and hear for yourself below, and let us know what you think.

If their cover of “Can’t Helping Falling In Love” is any indication, we’d say that 7th Ave is set for a successful future.