By Jennifer Pernicano on December 27, 2022
Advertisement 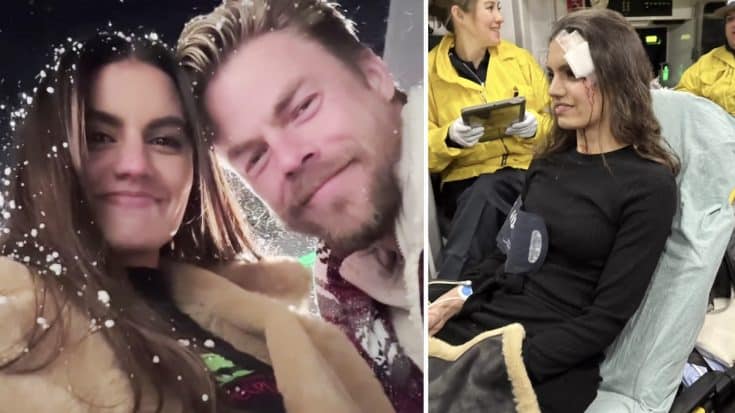 Derek Hough and his fiancée Hayley Erbert and counting their lucky stars. The dancing duo share a lot of their lives on social media from their dance videos, to find out their dogs’ DNA results, to Derek’s proposal to Hayley in June!

In a recent Instagram post, Hayley revealed that the couple of seven years had been in a “pretty scary car accident” while driving in the mountains.

“Our accident involved a steep hill, icy roads, a tree, and worst of all, the fear that we would slide off the mountain,” she wrote.

Hayley continued, saying that luckily no other cars were involved and that the paramedics were quick to arrive. She got banged up a little bit and required four stitches above her eyebrow. Hayley was left with a swollen face, too, but

She wrote, ” Now, more than ever, we realize how fragile life is and how important it is to love those around you.”

Hayley included some footage of the road they were driving down, photos of their car after the wreck, and some videos and photos of her getting treated by paramedics and at the emergency room.

“The scariest part was that Hayley doesn’t remember anything,” he wrote. “She was dazed afterwards, being cheerful saying we should keep going to dinner as blood ran down her face. That really scared me. She came to 20 minutes later when the firemen arrived.”

The couple celebrated Christmas together and from the photos, it looks like Hayley’s injury healed nicely!

See Hayley’s full post below about the car accident.