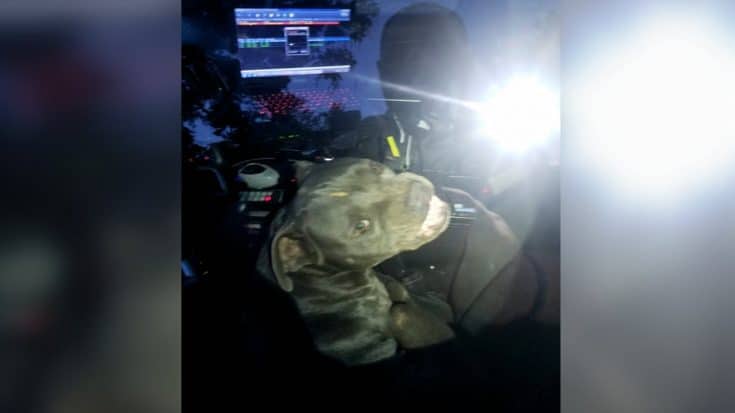 In Kilgore, Texas, there isn’t 24/7 animal control. Because of this, Kilgore PD officers are sometimes dispatched on animal control calls.

One officer was tasked with responding to such a call after reports came in that there was a potentially aggressive dog running free throughout the city.

Upon arrival, the officer tried to get the dog to hop in the back of the patrol car, but the dog wasn’t having any of it. The officer happened to leave the driver’s door of the car open as well, and the dog broke in and made its way into the front seat.

The officer tried to get the dog to get out of the front seat, but according to a Facebook post made by the Kilgore PD, the dog “became aggressive” when he did.

For his own safety and the safety of the dog, which the PD affectionately called “Cujo,” the officer decided to shut the dog inside the patrol car until animal control arrived to help. While the officer waited outside, the dog got to enjoy the comfort of his air-conditioned car and also tore through the his stash of beef jerky.

After hearing some commotion on the radio, the Kilgore police chief asked the officer what was going on, and the officer texted him the following picture of the grinning jerky thief.

PSA- Found dog. Officer was dispatched on a animal control call (Aggressive Pitbull). Since we don't have 24/7 Animal…

When the chief said that the dog didn’t look happy, the officer responded, “He ain’t, and neither am I.”

After the dog munched away on the officer’s jerky and enjoyed his nice, cool car, animal control finally arrived and took it “safely…into custody.”

“The only injury sustained in this incident was to the Officers (sic) pride,” the police chief wrote in the post accompanying the photo of the dog.

The officer may not have been amused by this whole ordeal, but it’s clear that other people find it hilarious! The Kilgore PD’s post has been shared thousands of times, the the story of the jerky-stealing dog is going viral. The pup is basically a celebrity by now!