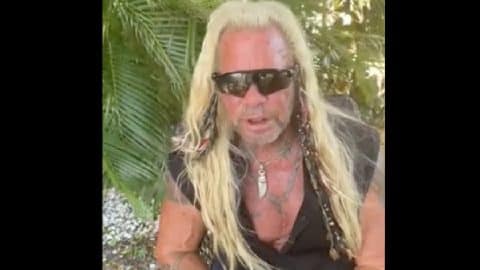 A&E reality television star Duane “Dog” Chapman, aka Dog the Bounty Hunter, has been helping with the search for Brian Laundrie, a person of interest in the death of his girlfriend, Gabby Petito.

The Florida-based couple were traveling the country in a van when Gabby was reported missing. Roughly a week after her mother reported her missing, her body was found in Wyoming’s Bridger-Teton National Forest. Laundrie is not unaccounted for and a massive manhunt has been underway to find him.

Tuesday, October 12, the Teton County Coroner released Petito’s official cause of death as strangulation. In an interview with Dog the Bounty Hunter following the autopsy release, he had some strong words for Brian Petito and his family.

“The coroner’s report isn’t good for the entire Laundrie family. Brian’s only chance is to turn himself in. He cannot run forever,” Dog told WFLA’s Josh Benson. “The Laundrie’s have stonewalled Gabby’s family because they knew what Brian had done, and it looks like they’ve helped him run. And now it seems like, based on the report coupled with their behavior, they have more than likely acted and aided and abetted a murderer.”

Dog then spoke directly to the camera with a message for Brian Laundrie.

“Brian, make a deal and turn yourself in…now.”

“Strangulation is not an accident. It looks very bad right now for the Laundrie family.” Dog The Bounty Hunter’s response when I asked him what he thought of today’s update from the coroner. (1/2) #GabbyPetito #BrianLaundrie @DogBountyHunter @BabyLyssaC #JusticeForGabby @WFLA pic.twitter.com/oEAMhXrIGl